When it comes to a full frontal assault on public education and the people who provide it, no governor takes a back seat to Wisconsin's Scott Walker. 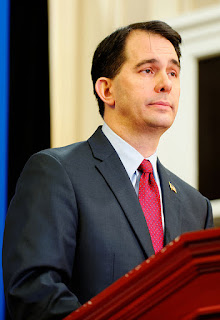 Walker's most famous for his 2011 move to strip public unions of their power to negotiate much of anything, a move that he made one of the foundations of his failed run for President. Act 10 gave school districts the directive to unilaterally shift pension and health insurance costs to teachers who, under Act 10, are now allowed to negotiate only wages-- and increases in wages are limited by a cost-of-living cap. That means even if a school district could afford to feel generous at the negotiating table, their generosity was limited by law-- and whatever piddling raise they gave teachers could all be taken back with insurance and pension hits on the teacher paycheck. Teacher pay under Act 10 is headed down.

In addition, contracts should now last one year, and the union must be recertified every year. (Also, no tenure for University professors, either.)

It turns out that Walker is not done. His current budget proposal offers additional funding to schools-- but only if they can prove that they used Act 10 to cut teacher pay and shut down long-term contracts. So any districts that had previously harbored thoughts like "We ought to treat our teachers decently" or "We would rather not drive all of our professional staff away" are now stuck between a financial rock and a staffing hard place. They can get back some of the badly-needed funding that was precipitously cut in 2012, but only if they agree to screw their teaching staff.

Does this seem guaranteed to drive even more teachers out of Wisconsin? Walker has another clever idea up his sleeve: no minimum required hours for school.

"If our students are succeeding, honestly I don't care how many hours they are in, if they're seeing success," said Gov. Walker. "To me, the report card is the ultimate measure. It's not how many hours are you sitting in a chair."

This proposal comes with all sorts of neat features.

Cyber-schools, for instance, don't need to have a minimum number of meat-form teachers available for a number of hours. One or two teachers, some software, and you can enroll a few hundred students.

And when Walker says "report card," he doesn't mean the report card issued by the school-- he means the state report card for the school. As long as your test scores are up and your attendance and graduation numbers are good, hey-- your school year is long enough.

According to some reports, this genius move is the brainchild of CESA 6, "a member-driven cooperative educational service agency," or as their LinkedIN profile puts it

CESA 6 is an educational solutions provider. Located in OshKosh, WI CESA stands for cooperative educational service agency. We provide regional services to school districts that range from providing staff for hard-to-fill positions to helping schools build Web sites, to professional development and coaching, and much, much more.

Honcho Ted Neitzke says the proposal is about flexibility. For instance, why should an AP class count the hours that the students spend reading their assigned books outside of school? I presume that means all homework would count as school time under the proposal. Hell, why not cut phys ed class, cut bus service, and count the hours students spend walking to school as school?

Not that this is about cutting costs. Oh no. And that may be true-- it may be more about reducing the need for staff. Can't find enough teachers who want to work under Wisconsin's increasingly regressive system? Split your school into morning and afternoon school meeting every other day and you can get twice the students, at least,  served by one teacher. Have trouble staffing classes that don't actually affect your state report card? Cut 'em and send the kids home early.

More than that, this also serves as a big blast of freedom for charters. Set your charter up however you want, teaching whatever you want, meeting as often as you want, with as few teachers as you want. Scott Walker says that's okay. Come be an edu-preneur, and  we won't tell you what you have to do, ever.

Would this reduce the number of teachers in Wisconsin? Of course-- and thereby weaken that damn union and its ability to stand up to guys like Scott Walker. And of course this also accomplishes the goal of making public schools less and less attractive so that charter schools can look better by comparison (without having to actually get good). Will this have any effect on the education of rich folks who can afford to make sure their children get into real schools that do real educating? Of course not, and that's undoubtedly part of the point--

Scott Walker has pushed hard on many reformster ideas, but the unifying principle seems to be one of the lowest of all reformy ideas-- wealthy folks (who deserve their wealth or why else would they be wealthy) should not have the government taking their well-deserved money to provide services for lousy poor people (who must deserve to be poor, or else they wouldn't be). And that include those damn teachers, who not only keep taking money they don't deserve, but keep using some of it to try to organize revolt against their rightful rulers. These peasants need to be sent packing and forced to understand that their Betters will decide what these Lessers deserve-- and the short list of what these Lessers deserve does not include an excellent, free public education.

Does all of this place Wisconsin squarely on the list of states to avoid if you want a teaching a career? Sure. Scott Walker's fine with that, because he doesn't want Your Kind here, anyway. God help America's Dairyland.