Why the Attack on Sarah Chambers Matters

Every day, from all over the country, we hear stories of teachers whose jobs are, for one reason or another, are on the line. Sometimes we hang back, correctly assuming that we don't have the whole story, that there are local issues that we don't know about. But sometimes these local stories deserve all the attention we can give them because they are an early warning of kinds of problems we could all face. So that's why I think you should keep reading when I tell you-- 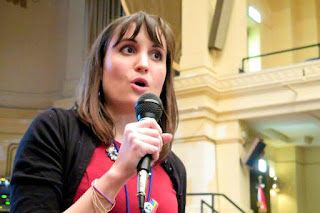 Sarah Chambers is under attack.

Chambers is a special ed teacher in the Chicago Public School system, serving students at the Maria Saucedo Scholastic Academy for the last eight years. She has been rated "distinguished" by six different principals. And as recent events have shown, she is much-beloved by her students and their parents, not because she's all warm and fluffy, but because she is a fierce advocate for those students.

CPS just suspended Chambers, and has served notice that they want to take her job.

Here's why we should all care.

According to Chambers, the stated reason for her suspension was that she was accused of encouraging students to opt out of taking the PARCC (a charge that she denies).

Let that sink in-- of all the possible kinds of professional misconduct that a teacher could be guilty of, the one that the district was willing to move quickly and forcefully on was not a matter that touched on student rights or mistreatment, not even allegations of pedagogical misconduct. No, the thing that would cause CPS to spring into action, the one line they absolutely won't tolerate being crossed is failing to support the Big Standardized Test.

Mind you, Chambers has been on CPS radar over testing before. In her chapter of More Than a Score
(which you can read here, but you should really get a copy of the book), Chambers talks about how the school's teachers organized a successful boycott of the old Illinois Standards Achievement Test. The full staff voted not to administer the test at all, and CPR pushed back with threats of disciplinatry action, firing, and even stripping of licenses. Some of this was aimed at Chambers herself:

The interrogators tried to scare teachers into naming other teachers leading the opt-out movement. They asked one of my colleagues, “Was this led by a Ms. Lambers [meaning Ms. Chambers, my name]?” They used this strategy to get teachers to correct the absurd name they created, and say that “Ms. Chambers” led the campaign.

Many staff members ultimately folded under the pressure, but Chambers had clearly made a name for herself in some offices.

Is this really all about protecting the sacred test? Doubtful. What seems far more likely is that CPS has decided to silence a strong and committed activist. Here's what fellow Chicago teacher-acitivist Michelle Gunderson thinks is behind the whole business:

Fear of the truth Sarah tells. Fear of the power of her leadership. And fear of the crumbling of the neo-liberal design for schools: underfund the schools, watch them starve, and blame the failure of the schools on the children, teachers, and the communities. Once our schools are deemed unfit they are ripe for privatization by our mayor, Rahm Emanuel, and his friends. Sarah’s work interrupts these plans.

Chambers had been part of a bunch of noise that thwarted a CPS to cut programs at Saucedo. She has been absolutely fierce in speaking out for her students, whose special needs make them special targets. Remember, we're talking Chicago, home of Arne Duncan and his idea that all students with special needs require nothing more but teachers with high expectations.

Gunderson lays out just a few of the other times that Chambers has been a leader in resisting decisions that were bad for students, bad for schools. CPS has been slashing support and programs like Michael Myers on speed, and Chambers has repeatedly stepped up and spoken out. And Chicago where, remember, the school system is run out of the mayor's office, is particularly sensitive to uppity educators-- only a brain tumor kept union president Karen Lewis from handing Rahm Emanuel a huge political thwacking, and principal Troy LaRaviere had to be run out of his job before he drew too large a crowd.

And Chicago stands as an example for the rest of us, out there consistently in the forefront of standing up for student rights, for equity, for quality education, and for the rights of teachers.

Even if you are not a big unionist, you must recognize that teachers must be free to speak out and stand up for students, and that means that we have to be free to disagree, strongly, when the folks in charge make decisions we believe are wrong. If we can't speak up without losing our jobs, or the fear of losing our jobs, how are we to do our jobs in the first place? Teachers have to be a voice in an effective education system. Sometimes a union is an important part of establishing and protecting that voice, sometimes not-- but the notion that a teacher should lose her job for disagreeing with her bosses, even if her bosses include major political figures with national aspirations.

I can't talk about this story without noting it's the umpty-millionth example of why we need tenure. Without any sort of job protections, Chambers could have been quietly fired over Easter and it would have all been done before anyone could even draw a complaining breath.

You may not have ever used the advice, but you've surely heard it-- if you have a class that's exceptionally unruly, pick out one of the worst kids and make an example of him. Stomp on him so thoroughly that the rest of the class will be afraid to breathe.

That sure looks like what we've got here. Pick out a teacher who's more vocal, more uppity, more annoying, and squash her both to end her particular irritations, and as a message to all her little friends to think twice before they step out of place and start messing with the big boys.

I could have reached out to Chambers like a real journalist, but first, I'm pretty sure she's got her hands full at the moment and second, I don't need to know about her background or her educational philosophy or whether or not I find her likeable to know that what CPS is trying to do to her is wrong. It's wrong. The official cover reason for trying to can her is wrong, and the unofficial apparent reason for wanting to can her is wrong-- especially because there seems to be widespread agreement that she is good at her job, who has been called a "tireless advocate for children.".

Chambers' hearing has not yet been scheduled. Meanwhile, Saucedo already has two openings in special ed. There is still plenty of time to make noise. The point of this business is to make teachers be silent. Don't be silent.

There's a petition here you can sign. You can spread the word (I recommend this piece by Gunderson). And pay attention, because this case is a message to us all.


Posted by Peter Greene at Monday, April 17, 2017
Email ThisBlogThis!Share to TwitterShare to FacebookShare to Pinterest