When someone tells you who they are, listen to them.

Representative Markwayne Mullin (Rep-OK) told his constituents a great deal this week, when in a town hall meeting he said this: 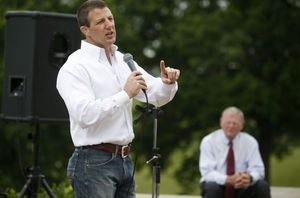 You say you pay for me to do this. Bullcrap. I pay for myself. I paid enough taxes before I got there and continue to through my company to pay my own salary. This is a service. No one here pays me to go.

And as a follow-up--


I’m just saying this is a service for me, not a career, and I thank God this is not how I make my living.

On the one hand, Mullin's point seems to be that he's not a professional politician and doesn't have to kiss a bunch of Oklahoma ass just to keep his cushy job. On the other hand, exactly who is he working for?*

Mullins has an interesting backstory-- he's one of two Native Americans in Congress (Cherokee Nation), a pentecostal, and a former mixed martial arts fighter. He once hosted a radio talk show about construction and fixing stuff up.

Other parts of his story are garden-variety rich kid fare. He took over his father's plumbing business (actually a conglomerate of several businesses). He railed against the Recovery Act in 2009, but his business accepted $370K in stimulus funds. In 2012, he won a six-way primary, followed by a run-off, to ultimate recapture a former Dem seat for the GOP.

So when he suggests that his Congressional salary is not how he makes his living, or that he's just getting back some of the tax dollars he's paid the feds over the years, he's not entirely wrong (a Representative makes about $174,000 plus benefits and perks). That is probably not enough money to make him think, "Woah-- I work for these people, and I'd better make sure I keep them happy."

Mullins is not an anomaly-- he's just a guy who accidentally said what he really thinks. He's actually representative of two current trends in government.

The first, and less obvious one, is influencing many policies, but none more so that education policies. It's the notion that once money comes into your possession, no matter how, it's your money-- and when you give some of it to the government in the form of taxes, it's still your money. If you can get it to come back to you-- well, that's just recovering what is rightfully yours. And if you can't, you can damn well follow its progress to make sure that it's not spent on things you would never, ever spend it on yourself-- like, say, schools in neighborhoods filled with non-wealthy non-white people. How dare they use my money for their lousy schools-- if they want to spend money on their schools, then they should get some money of their own.

The second is not a new problem, but it is certainly spread throughout this administration. When rich people take a government job for what is, to them, peanuts, then who are they working for?

This is not so much a question of wealth as it is a question of character. We've had plenty of rich folks in public service who were, in fact, interested in serving the public when they could have been home cheering on polo ponies and counting their money. But right now we're dealing with a different situation. Trump is proud that he doesn't need this job, and even though he's been hired as America's Number One Employee, it seems clear that Trump still works primarily for Trump.

Betsy DeVos, like most of the cabinet members, does not need her job for anything, and the actual salary probably wouldn't be missed if someone swiped it from the change bowl at the DeVos home. Does she work for the President? Does she work for the American public? Taxpayers? The interests represented by the USED? Or does she work for what she sees as her own interests? I'm not inclined to think that DeVos will be guilty of great self-serving in the office; I'm more afraid that she sees herself as working for her own personal ideology, or God (as she interprets Him to be).

I don't want to see government filled with people who desperately need their jobs to get by. Federal governance involves a whole lot of money, and that can be a huge temptation if you are person who hasn't had a lot and would really like to have more. There really is something to be said for people who can look at that kind of money and not be distracted.

But we still pay those folks a salary because it remains a tangible reminder that they work for us. I don't support officials forgoing their salaries for exactly this reason-- you guys work for us, and I want you to remember it.

Government is now infested with people who are there to serve interests other than public interests, who are there in many cases to work against the interests represented by their department. Unlike Mullins, most are not honest or foolish enough to say out loud, "You don't pay me to do this. I don't work for you. I'm doing you a favor by taking this stupid job. You should be grateful. You aren't the boss of me."

Who is the boss of them? The financial interests that helped them get the job. Their massive egos. Or they are rich enough to be self-employed. We've been working this puzzle in the area of school reform for several years now-- if we're going to replace public schools with something else, which masters will that something else serve? If the public isn't going to be the boss of education, then who is?

But while we've been focusing on education, the same questions have been working their way into our entire government. And when our elected officials stop working for us and start serving other masters, that's when our very government has been privatized.


*Yes, yes, I know. The proper construction is "For whom is he working." It's a Saturday morning, I'm off duty, and I'm going to go with a more colloquial approach. Grammar police warrants can be served in the comments section
Posted by Peter Greene at Saturday, April 15, 2017