PA: Are We Future Ready?

Pennsylvania is using its newfound ESSA-empowered freedom to create a new dashboard for measuring school awesomeness-- Future Ready PA. Many folks in Harrisburg are very excited about it and are touting it as a relief from the standardized tests that are "failing" PA students. Let's grab our flux capacitor and our supply of illegal plutonium! 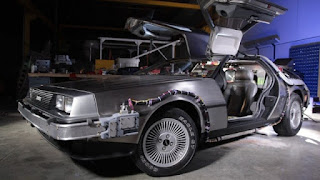 Is Future Ready PA all that and a bag of Snyder's chips? Well, I've looked at it before and, spoiler alert-- no. But it's time revisit this mess in more detail. Let's look at a breakdown of the pieces parts courtesy of the state's own power point slides from its webinar presentation about FRPA. I'm going to skip some of the boring history stuff and cut straight to what's there on the dashboard. 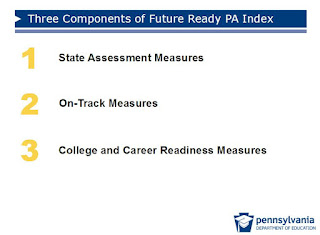 FRPA has three main components. Let's take each one at a time, and see how the state will free us form the shackles of standardized testing. 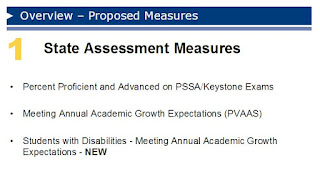 The first component has three pieces, and two of them are already well-known to us-- the test scores themselves, whipped together with PVAAS. I'm not going to launch into a long discourse on the folly that is PVAAS other than to note that it was developed by a man whose specialty were agricultural genetics, has been pretty heavily debunked, and appears to be a bunch of gobbledeegook. I find it hard to believe that eight years later, we're still holding on to it.

But we do have one new measure here-- we're going to apply PVAAS to the population of students with disabilities. This is a bold promise, especially if you understand that what PVAAS claims to do is statistically strip out the effects of certain characteristics, IOW, here's what your poor student Chris would get on the test were Chris not poor. To apply this to students with disabilities means the PVAAS folks (the company SAS), must think they can strip out the effects of a particular disability, as in, here's the score Chris would get were Chris not dyslexic, or blind, or challenged with a particular learning disability. I can only assume that the secrets of such statistical legerdemain were delivered by Yetis riding on the backs of rainbow-colored unicorns. 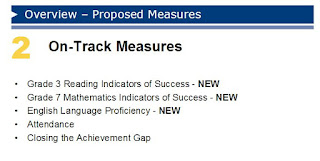 Next up are the "on-track" measures, because "on-track" sounds more friendly than pass-fail benchmarks.

The third grade reading and seventh grade math indicators are two of the less-awful features of FRPA because the local school district gets to A) choose the instrument used to measure and B) choose whether or not to have the results included in their FRPA index. So while your local district may have just picked up one more standardized test to pay for and grade, at least there's a little bit of local control. Also, you only have to count students who have actually been there all year-- so take that, cyber charter students who were dumped back into public school at the last minute.

English Language Proficiency seems to be aimed at ELL students via the ACCESS test-- so one more standardized test score in the mix. Super.

And then there's closing the achievement gap. Always a challenge, this. Because if you have a race and some people are ahead because they're faster and others are behind because they're slower, you have to figure out a way to make the slower racers go faster than the fastest racers in order to catch up and close the gap. Even if your behind folks are behind because the leaders got a head start, the gap can still only be closed if the people coming up from behind are faster than your leaders. I suppose you could also close the gap by handicapping the leaders, but that seems contrary to the spirit of the whole education thing. Let's see if the slide about this point offers any help: 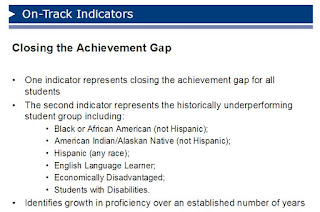 Okay, so that's a no. We'll have a couple of measures and some specific groups that we'll be checking in on over some specific time. 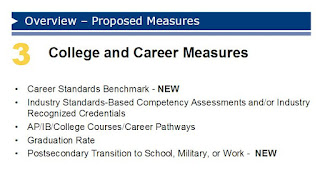 Under College and Career Measures, we have some new items, starting with the new Career Standards Benchmark. The good news about the CSB is that it will be easy to hit with a simple display of paperwork and targeted hoop jumping. The bad news is that it's pretty pointless.

We'll have fifth graders complete some sort of something something. And an eight grader's personal career plan should be a spectacular thing to behold (video game tester is a career, right?). An eleventh grade career portfolio is just a couple of wikipedia clicks away. This is really an old school public school institutional assignment-- the kids can sleepwalk through it while the adults pat themselves on the back for really Accomplishing Something. But hey-- I bet we're all going do great on this measure, even if it has no actual effect on our students. 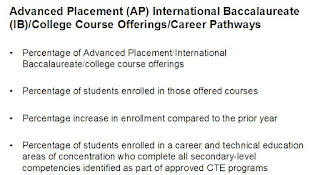 As always, I salute the salesmanship that the College Board has displayed in getting entire state governments to shill for the products they sell. It's kind of amazing, as if the state government said that schools would get a higher rating if all their teachers drove Fords and their cafeteria sold only Pepsi products.

Buy into the College Board's line of AP products, and earn more points for your school. Force more students to partake, and get even more points. How schools are going to get the percentage of students signing up for AP courses to grow every single year forever is the kind of mystery that only someone who was Below Basic in math could solve. Schools are doomed to lose on that one as they reach market saturation.

I do, however, applaud FRPA for including a CTE component here as an equivalent to AP classes.

Graduation rate-- well, I'm not sure. The slide says that graduation rate counts every student who graduates "in six or fewer years with a regular high school diploma." If we mean "graduates from a 9-12 school," then hurray-- that's a step up from the old standard that said only four year grads counted, meaning that a student who ran into trouble and then righted herself and graduated in five years was counted the same as a drop out. That was wrong. This is better.

Transition to work, military or school. Graduates have sixteen months to get a job, get into post-secondary education, or get in uniform. I'm no hidebound traditionalist, but as always I have to ask if nowadays we consider becoming a stay-at-home parent a failure at life? And how good a job does it have to be-- does part-time fry dunker at Micky D's count?

And funny thing-- the slide show completely skips over a specific slide for "Industry Standards-Based Competency Assessments and/or Industry Recognized Credentials." Which industry? Which standards? If this is meant to include earning, say, welding certification, that's super. If it's meant to open the door for personalized competency-based learning mini-badges etc, then this is very unsuper indeed.

Pennsylvania's current plan is to submit their ESSA paperwork in September (provided, of course, that the Department of Education still exists then), and then we'll all be getting Future Ready in the fall of 2018.

Will some of the gaping holes in this plan be fixed by then (seriously-- the percentage of AP students has to increase every single year?) but only time will tell. Likewise, only the implementation of this baloney will reveal exactly how a new set of perverse incentives will affect Pennsylvania's schools.

We already know that emphasis on test scores warps schools and curriculum. Harrisburg has postponed using the Keystone Tests as graduation requirements, and Secretary of Education Pedro Rivera hints that we aren't done kicking that can, probably because nobody is ready to be the politician who decided that a huge number of students with passing grades can't graduate because of a really crappy standardized test:

Finally, Pennsylvanians know that the Keystone Exams shouldn’t be the only ticket to a seat at commencement. In 2016 the General Assembly unanimously passed, and Gov. Wolf signed, a law delaying the use of Keystone Exams as graduation requirements until 2019. Part of the law required PDE to investigate and report findings and recommendations on ways Pennsylvania students can demonstrate postsecondary readiness.

Yet, the Keystone sits here in Future Ready PA as a measure of school effectiveness. Will schools continue to emphasize test prep and make Keystone passage a local graduation requirement? Will they jam students into AP courses whether it's a good fit or not?

Future Ready PA maintains two fundamentally flawed foundations of the worst shcool evaluation systems-- First, it maintains a deep dependence on bad standardized testing that emphasizes a narrow piece of the curriculum and Second, it fosters a model of education in which students are not there to be the center of the school's existence-- instead, those students are there to be mined for the data and numbers that the school needs to survive. FRPA is one more evaluation system that fosters upside down schools, schools that are not centered on the needs of the children, but in which the children are there to meet the data needs of the school. This is not the future-- it's the last ten years. We have already seen this future, and it stinks.

Posted by Peter Greene at Saturday, April 15, 2017
Email ThisBlogThis!Share to TwitterShare to FacebookShare to Pinterest