Just a reminder that it's not just Republicans who have insane ideas about education. Rahm Emanuel, former Obamabro and current mayor of at least some parts of Chicago has unleashed this genius idea, as covered by CBS today: 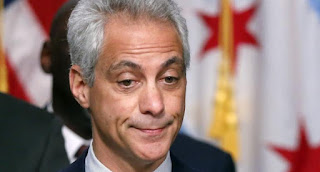 “We live in a period of time where you earn what you learn,” Emanuel said. “The school system of K through 12 is not applicable to the world and the economy and the world that our high school students are graduating to. So we’re moving to a pre-K to college model.”

Under the proposal, all Chicago Public School students starting with this year’s freshman class would have to show an acceptance letter to a four-year university, a community college, a trade school or apprenticeship, an internship, or a branch of the armed services in order to receive their high school diploma.

That's it-- Choose college, trade school, internship, or military, or else Rahm will hold your diploma hostage.

Janice Jackson, CEO of Chicago Public Schools, pointed out that any student who graduates from CPS is automatically accepted into the City College community college program. So I suppose we could see this not as a draconian, one-size-fits-all intrusion on the lives of young adults and instead see it as a really, really aggressive recruiting program for the City Colleges.

My mind is still reeling from trying to compile the full list of life paths that Rahm Emanuel has now declared Not Good Enough.

Steady job that's not a trade? Working musician? Stay-at-home mom? Person who just needs to spend a year or two working at a crappy minimum wage job while they figure out what they want to do next? Manage the family business? All of that and more have passed through my classroom and gone on to successful, productive, happy lives. Are you telling me we shouldn't have given them a diploma because they didn't do what we wanted them to after graduation?

Nor do I imagine for one Chicago Second that wealthy parents whose children are not ready for or aimed at one of these four choices while they are still high school seniors-- those parents are going to say, "Oh, well, then. I guess you don't get a diploma. Them's the breaks." No-- this is one more numbskulled reformy idea that wealthy parents would not tolerate for a single second. Now, there are exemptions for incarcerated students-- maybe there will also be exemptions for trust fund students. This is one more reform aimed at Those People's Children, because Those People's Children really need to be pushed in the correct direction.

Demanding that an eighteen year old develop a life plan, right now, this minute, or else, is just rank foolishness. To demand a commitment to that plan, right now, that involves a commitment to give up a year or spend a ton of money or both-- also foolish. And I don't even know how to stop goggling at the idea that people who won't go to college or learn a trade should go become cannon fodder in a foreign land.

But to attach such high stakes is the worst, particularly since three of the four options require someone to accept the student. Is the army not recruiting? Can they not afford a four year college? Do they lack the skills for a trade? And are they not really geared for a path that lead through community college? Well, too bad, because now they have a double strike against them-- no plan yet, and no diploma, either.

And as many commentators have noted, the slashing of guidance counselors from many Chicago schools (not the rich ones, of course) leaves students with even fewer resources to meet this new demand.

Rahm's goal of making education K-14 may or may not be a worthy one, but this is a terrible way to go about it, a method that ignores the diversity both of student talents and the different timelines along which we all grow. This is the kind of paternalistic top-down thinking that gives us, "Well, I think all these kids are making a mistake, so I'll just make them do what I want. I know what's best for them-- I will make them do it." No more freedom of choice for you, because you're not doing it right!

It's bad policy that comes from bad impulses and will yield bad results. But congratulations class of 2020-- it's your future. Just one more reasons that mayors should never, ever, be put in charge of public school systems.
Posted by Peter Greene at Wednesday, April 05, 2017
Email ThisBlogThis!Share to TwitterShare to FacebookShare to Pinterest