The attempts to do away with teacher tenure. The work to break the teacher unions, resulting in lower pay and less job protection. The initiatives for driving down teacher pensions. The legislative moves to take away sick and bereavement leave. The continued scapegoating of teachers. Lots of teachers look at all that and ask-- 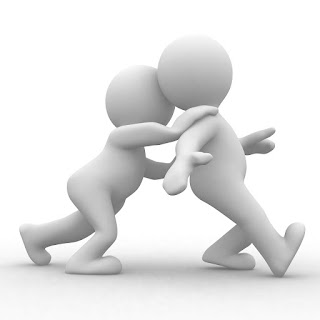 There are, I think, three answers:

No, because teaching is a calling...

Some folks believe that teaching is such a calling and teachers are so closely identified with their profession that a teacher can't choose to not be a teacher any more than a tall person can choose to be short. It simply does not occur to these folks that a person has a choice, that a person can decide to enter the profession or leave it (and if the person does choose to leave teaching, well, that just means she wasn't really a teacher after all).

So it doesn't matter what you do to the profession-- real teachers will always want to be teachers.

No, because teaching is just a lady job...

Some folks still think of teaching as a job that some nice lady does for a few years while her husband is the real breadwinner in the home. It's like a really convenient part-time job that lets them work the same hours that the kids go to school and make a little extra money to cover grocery shopping or a nicer vacation. But it's not a real job, and they aren't really depending on it for their families or anything, so the working conditions don't need to be all that great. It should be noted that there are some teachers out there who don't exactly help counteract this stereotype.

So it doesn't matter what you do to the profession because it's not a real profession anyway.

Yes, they know exactly what they're doing.

Too many folks assume that there must be a misunderstanding or failure to Grasp the Situation, because surely nobody would want to drive people out of the profession on purpose.

But teaching is being lined up for dismantling like many jobs before it. From car-building to meat-packing, corporate leaders have found financial savings in being able to replace skilled workers with assembly-line drones. Breaking down a profession has numerous advantages if you're in power.

For some folks in the corporate reform movement, the teaching ideal is a Teach for America model-- the teacher comes, works for a few years, goes away. That teacher is easily replaced because in this model, the teacher is just a content delivery specialist who delivers the teacher-proof curriculum-in-a-box, or switches on the personalized learning computer and helps the occasional student deal with an issue. The easily replaced teachers is cheap-- not just because she doesn't stick around long enough to need a raise, but because her health insurance and pension costs are minimal. And because all the teachers in the building are coming and going, they don't have a chance to band together and start making noise over anything from teaching conditions to wages to the mistreatment of students by administration. And the lack of job protections (no tenure, no seniority, one year contracts) means that anybody who does look like any kind of trouble at all can be removed. You'll want to keep around one or two "team players," whose decent salaries can be used as enticement for recruitment and who can be counted on to help you keep everyone in line.

That's the dream. Sure, it means that parents and students walk into school every fall to see familiar-ish faces gone and new strangers in classrooms. But so what? Isn't school about pumping test-prep info and skills into their little heads, and not relationships?

And as an added bonus, the breaking of the union helps negate unionism as a political force. From the local level, where teachers can no longer get involved in school board elections, to the national level where NEA, the largest union in the nation, has less political juice (though, as long as they keep doing boneheaded things like supporting the Common Core, backing Arne Duncan, and giving Clinton an early-bird endorsement without talking to the membership, the NEA is not necessarily a big, scary threat).

Teachers are generally reasonable, educated people and it can be hard for them to see when opponents don't share "obvious" values. Surely, we think, these people can't want to actually drive people out of the profession. But the signs are clear that some people do, in fact, want to remake teaching in a new image, just as Ray Kroc and the McDonalds brothers remade restaurant chefs into minimum-wage assembly line workers.

For the people who see education as a $600 billion egg just waiting to be cracked, converting the education workforce into an easily replaced, high churn, low cost labor force is a worthwhile goal. Will it provide better education for children? Who cares? Did the McDonalds worry about whether or not they could crank out gourmet food? No, the goal is to get the revenue flowing away from public school workers and toward private pockets while simultaneously making that work force more compliant, less troublesome, and more easily managed.