Chester "Checker" Finn, Grand Poobah Emeritus of the Thomas B. Fordham Institute, is the reformster most likely to unleash his higher dudgeon over Kids These Days and Those Darn Teachers, and he has done so again on the Fordham Flypaper blog. "Will Teacher Tenure Die?" appears to have been edited down from an original title, "Will Teacher Tenure Ever Die, Please?"

Some of his complaint is simply incorrect. As his old colleague Diane Ravitch points out, his notion that K-12 trickled down from colleges and universities is ahistoric-- K-12 tenure was a response to too many teachers losing jobs to school board members' nieces and failing to register with the correct political party, among other abuses. 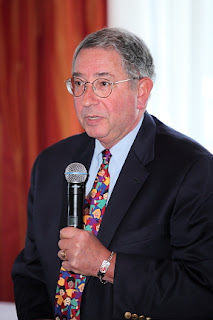 After cheering on the slow death of tenure at the college and university level (because I'm sure having a cadre of part-time underpaid instructors is going to make college education super), Finn goes on to bemoan the continued existence of tenure in the K-12 world (even, in some cases, by contract in right to work states). And teachers can get tenure after only a few years and some "satisfactory" ratings, which strikes Finn as evidence. This is an old reformy trope, and I'm not sure what to make of it-- instead of saying, "Hey, teachers are mostly well-rated, so the profession must be in good shape," reformsters say, "Hey, teachers are mostly well-rated, so the evaluation system must be broken, because we just know that a huge number of teachers suck." So, data is good, unless it conflicts with your pre-conceived biases, in which case, just throw the data out.

Finn also persist in calling tenure "life time employment," which is simply flat out wrong. I can rattle off a list of teachers in my area who have lost their jobs despite tenure. Any teacher who's been around a while can. And while there are some large districts where the process is long, convoluted and prohibitively difficult, mostly "We can't fire her because if tenure" is administrator-speak for "I could fire her, but it would take a lot of time and I'd have to, you know, work really hard, and then I would have to find a replacement and you know how hard that would be and I'm already backed up on meetings this week and now some kid just threw up in the hall, so how about I just blame her on the union and tenure and get back to my own work." Where burdensome dismissal procedures exist, they have been negotiated into contracts. Fixing those contracts by outlawing tenure is like fixing the electoral college by installing a dictatorship-- little bit of overkill.

Finn likes the idea of trading tenure for money, and he's not the first. He's correct in noting that job security is a feature that makes low pay palatable (or at least choke-downable) for many teachers, but he misses the flip side of this-- due process protections are something school districts can offer to make their jobs appealing, and they don't cost the district a cent. Finn imagines asking teachers, "Would you give up job protections in exchange for another $25K?" But the real challenges is asking districts, "Which would you rather do-- promise teachers not to fire them for stupid reasons, or pay them each another twenty-five grand?" Which choice do you think boards would prefer? (Hint: only one option increases the budget by a few million dollars>)

Finn recognizes that tenure has value as a bulwark against favoritism and discrimination, but then dismisses it because "the codification in constitutions and statutes of innumerable due process and anti-discrimination protections radically shrinks the rationale"-- in other words, we have laws about that stuff that people mostly follow, mostly. The thing is, absent any sort of reliable or valid teacher evaluation system (which is where we are right now), any administrator can game the system and mask her discriminatory and biased behavior behind any sort of "clean" rationale. And laws do not cover things like running a teacher out of the classroom because she won't let a school board members child start on the softball team or play the lead in the school play.

Finn ticks off "academic freedom" as a legitimate concern, except that the First Amendment argument doesn't have as much "oomph" for him because so many professors are using their First Amendment rights to indoctrinate pupils. In other words, freedom of speech is only necessary for people who are saying the right things. He also correctly notes that so many court cases have taken so many chunks out of the First Amendment for teachers that it's fair "to ask just how much difference does “academic freedom” make to a fourth grade teacher."

He skips completely over the issue of teacher advocacy-- the situation where a teacher has to advocate for a student against the school administration itself.

But Finn has some other ideas, and they start with this humongous whopper:

It’s no secret that the HR practices of private and charter schools—neither of which typically practices tenure—work far better than those of district schools from the standpoint of both school leaders and their students.

As it turns out, it is absolutely a secret. Or, more accurately, it's a thing that is not known to be true.

What Finn means, because he is a fan of the CEO model of charter schools, is that the school leaders are free to hire and fire and shuffle around teachers at will. Nobody should have job security, because job security interferes with the visionary boss's freedom to indulge his vision as he sees fit. Like a 19th century robber baron, he will sit atop his kingdom and only his judgment will be needed to determine What Is Best for all of the Little People. The Little People should be grateful to receive such largesse, and should show their gratitude by staying in their rightful place and keeping their mouths shut. Think I'm overstating the case? Here's the rest of the paragraph that was kicked off by that last sentence:

That’s because the leadership team can generally employ (and deploy) the instructors they deem best suited to their pupils and they’re not obligated to retain any who don’t do a satisfactory job. They can be nimble in regrouping, restaffing, and redirecting their schools—and everyone who works there knows that’s how it goes. Nobody has a right to continued employment untethered to their own performance and the school’s needs. The employer has the right to change the shape, nature, and size of the organization, to redeploy human resources, to substitute capital for labor, to replace elbow grease and sitzfleisch with technology, and to hire and fire according to shifting pupil needs and organizational priorities.

Emphasis mine. 19th century robber baron attitude, his. In a Proper School, teachers are drones and widgets, coming and going and moving about at the pleasure of their CEO, who will decide what needs to be done, how it needs to be done, and even if the organization needs to be changed in some fundamental way. Pupils will consume whatever is put before them at the bidding of their Betters. Organizational priorities, as defined by the Gifted CEO, rule all. In this world, the CEO is the sun, and those damned planets better not even think of unionizing or demanding tenure.