Ohio Has A Chance To Fix A Terrible School Takeover Law. It's Going To Blow It.

It looked like Ohio was going to get better, but the legislature is poised to screw it all up.

It has been hard to keep up with the news out of Lorain, Ohio, a school district that is being run through the wringer under Ohio's terrible, awful, no good, really bad school takeover law (HB 70). Lorain's CEO (a district takeover czar created by HB 70), David Hardy, Jr., is yet another guy who believes that his two years as a TFA temp in a classroom qualifies him to be an education policy expert and, under HB 70, run every single aspect of a school district-- well, at worst, he is someone who has vastly over-estimated his capabilities and, at best, is a manager who does not play well with others.

I'm not going to go through all the shenanigans of the past many months, but one episode gives you a flavor of the atmosphere in Lorain. The district treasurer tried to resign for a new job. The board did not accept his resignation, but Hardy did, and proceeded to attempt to replace the treasurer with his own pick. The board filed a restraining order against Hardy, who in turn threatened that the district staff would not be paid, a threat that seems to have been based in nothing more than Hardy's tendency to get pissy when people get in his way (kind of like the time he "fired" some union reps).

But meanwhile, even as Hardy has been working overtime to show all the ways that HB 70 is a bad law, legislators were working to change it. And they were doing pretty well-- the House passed a bill that was actually incorporated into then budget. And it was right about then that the champions of privatization in Ohio decided they should get back in the game. There are some business and reform folks who have exceptional access to legislators in Ohio, and they have a lot to say about hw education laws are written. Their  fingerprints are all over this mess.

The used-to-be-a-reform-of-the-reform bill is HB 154, and it has been through a whole raft of changes. Since HB 70 was passed in less than a day with no real discussion, it's only fitting that the last version of Sub HB 154, which is actually a complete swap of the original bill for a new bill under the same number, should be coming down to the wire as a well.

I will walk you through some details in a moment, but the bottom line is this-- the latest version of the bill is a cynical piece of baloney, a thin pretense that is the kind of thing that legislators produce when they don't have the guts to vote down a popular bill. The substitute version of HB 154 reforms nothing, fixes nothings, changes nothing-- it just renames a few things in a piece of underhanded bullshit.

Here are some of the details. (I'm working from a pdf copy shared by someone on the legislative mailing list).

The original HB 70 put "failing" districts under the control of an Academic Distress Commission. Sub HB 154 puts failing school districts under the control of a "school transformation board." That board is stacked with folks selected by the governor and the state ed chancellor, just like the ADC. There's one spot reserved for local union seat; good luck with that. Three members (the governor's picks) must have "experience and expertise in education policy or school improvement," because this law is loaded with opportunities for all sorts of education consultants and edubusinesses to cash in on a school district's problems.

Other earlier versions of the reform-the-reform bills included various amounts of relief for the three districts under state meddling control (Lorain, Youngstown, East Cleveland); Sub HB 154 states that any district that has an ADC now gets a School Transformation Board.

This next part you just need to see to believe: 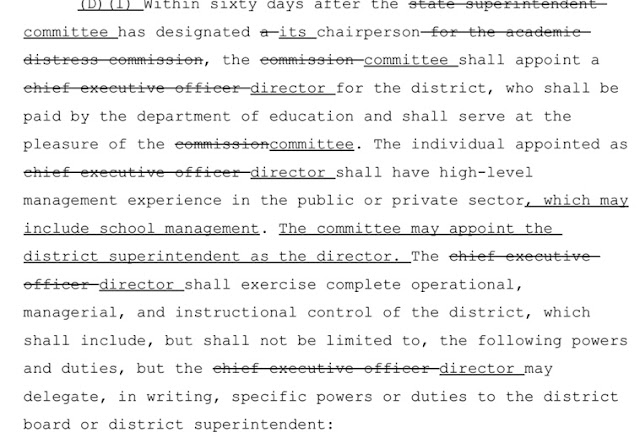 Yep. They just went through, crossed out "chief executive officer" and wrote in "director."

The job remains the same as it was under HB  70-- everything, from bus schedules to teacher assignments to cafeteria set-up. The job requires someone of super-human capabilities and vast knowledge of all the workings of a school system, from philosophical underpinnings to the nuts and bolts. The CEO director has all the powers of a superintendent and the school board, plus nifty powers under worst case scenarios in which he can also unilaterally rewrite contracts, close schools, and hand schools off to charter operators.

It's nuts. There can't be a dozen humans alive who could handle it. But then, the new bill also leans heavily on the idea of hiring lots and lots of consultants to make everything work.

The new bill does allow the superintendent to be selected for the czar job. It also requires the czar to make quarterly reports to the board, which is probably a nod to the fact that Hardy refused to talk to the elected school because they aren't the boss of him. The bill also adds a procedure by which the board can protest and ask for another option. Good luck with that.

Folks, Sub HB 154 is HB 70, with some names crossed out and a couple of minor changes here and there.

And hold onto your hat-- the Senate Ed Committee was supposed to be getting another amendment at a hearing set for today, but now rescheduled for some other. I told you it was hard to stay in front of this story. If you're in Ohio, pay attention and contact your senator, repeatedly.
Posted by Peter Greene at Tuesday, September 24, 2019