Are School Vouchers A Path To Religious Freedom?

Let me make a confession-- I am not at all unsympathetic to many Libertarian beliefs. I am wary of government involvement in many arenas, and the bigger the government, the warier I am. Additionally, I know some Libertarians personally, and they are perfectly nice human beings. But when you start turning general Libby philosophical notions into specific policies, particularly in areas where my exercise of my liberty crashes into your exercise of your liberty-- well, that never seems to work out well-- or even consistent.  At a minimum, I find some of these conclusions puzzling.

The argument that to have "equality under the law," religious folks need to be able to fully exercise their beliefs, including sending their children to a private religious school, and so taxpayers should fund vouchers for just that purpose. 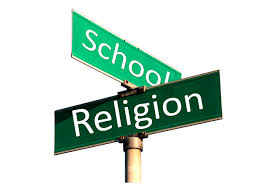 This is a close cousin of the argument that this administration has put forth in a variety of forms, which boils down to this: if your personal faith says you should discriminate against certain classes of people, but federal law says you can't, then federal law should step aside for your personal beliefs. This point of view has scored a victory or two, and it's important because it marks the first time that the battle between the free exercise clause (you should get to exercise whatever religious beliefs you hold) and the establishment clause (the government should not choose a side in the world of unending religious debates) is being decided in favor of the exercise clause.

You have, of course, always been free to send your chid to a religious school. What's new here is the argument that the government should pay for it.

I'm confused at finding this argument coming from conservative Libby folks. These are the same folks who like to characterize taxation as theft, but in their support of vouchers, Libbys are saying that citizens should be taxed so that their neighbors can practice their religion. Imagine telling a community of right-wing Trumpian Christians that their property taxes will be used to send children to an Islamic school, or Southern Baptists discovering that their tax dollars will be supporting the local Catholic school. This does not require a great deal of imagination, as part of how we got here is the outrage of religious taxpayers being riled up (sometimes honestly and sometimes at the prodding of those who would like to weaken public schools) that their tax dollars are going to a public system that allows the study of Other Religions (aka the not-Christian ones) or Transcendental Meditation or evolution. Good heavens-- just watch this administration go after colleges just for saying too many nice things about Islam.

Their argument is that they don't want their tax dollars to support a school that doesn't teach the things they agree with-- but a voucher system will not change that one iota. The public system is ideally religiously neutral, and yes, I know it is not always successful in that regard, but at least the ideal is there. A voucher system with no religious restrictions allows, even requires, your Christian tax dollars to be sent to a school that  explicitly teaches that your faith is wrong.

Beyond that, a voucher system also gets government in the business of religious oversight. It's possible, I suppose, to have a voucher system with no oversight at all in which parents are handed a government check that can be spent on private school tuition, textbooks, an X-box, or a used car. We could have a system where the government just gives the money away, no questions asked. But again, that seems to have been one of the objections reformy folks have to public schools in the first place, and I think, "Just give us your money and don't ask where it's going" is unlikely to fly with folks interested in accountability.

So at a bare minimum we get a system in which a government agency asks, "Are you going to spend  this on something legit? Is this place a real school?" When then Catholics, the Free Methodists, the Muslims, the Satanists, and the Pastafarians are fighting over limited resources and are each struggling to prove that they're a real school that is entitled to voucher funds, how exactly is the Government Bureau of Legitimate Religious Schools going to make that call? And why would anybody want them to??

It is a measure of how narrow-focused and how assured of their own supremacy that Christianists are that they tend to imagine that breaking down the wall between church and state would only unleash Christians in the public square, and not also every other religion and anti-religion to fight for space in that same square. Nor are enough people of faith conscious of the fact that the wall between church and state protects the church just as much as it does the state.

I always expect Libertarians to struggle with religion-related issues; after all, Libertarian Patron Saint Ayn Rand thought religion is for dopes. But I am sincerely puzzled that Libbys would advocate for any of this. I expect a certain amount of "Anybody should be able to educate their kids any way they want," (even though I'd argue that as a country we have a stake in making sure that everybody gets an education based on the strongest current body of knowledge we have available). But when you add on "and taxpayers should foot the bill," I'm just sincerely puzzled to find Libertarians and other righties cheering. They didn't  want to pay for anyone's health care; why would they want to pay for their education?

There are plenty of other reasons to oppose vouchers without religious restrictions, including the tendency of such schools to discriminate in ways that are, and should be, illegal. That's before we even get to questions about accountability,  both financial and academic, as well as the sheer financial inefficiency of trying to pay for multiple school systems with the money that wasn't enough to fund a single system.

Maybe Libbys like this idea for no reason other than it punches another hole in public education. I generally think of Libertarians as more intellectually honest than that, but I have a hard time seeing why they would be interested in pushing federally-subsidized religion. Yes, parents chose, sort of (is there any better  marketing hook than "Give us your voucher dollars or your child might go to hell"), but taxpayers, those poor abused victims of the government pay. It's a bad idea for so many reasons, reasons that cover such a broad range that some of them should be visible no matter where you sit-- even if you sit way over on the right.
Posted by Peter Greene at Monday, September 30, 2019
Email ThisBlogThis!Share to TwitterShare to FacebookShare to Pinterest