What I Know About The Reading Wars

Lord save us from the unending arguments about reading instruction. I started a Twitter thread just after Christmas and that thing was still flopping around six months later. Emily Hanford has somehow milked one not-very-new observation ("Use phonics") into a series of widely shared articles, which in turn has stirred up all the articles that people wrote the last time phonics was being  praised as the One True Science for Reading Instruction. And on and on. 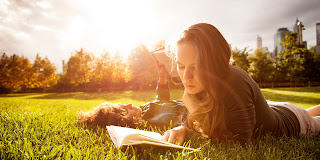 I live with an elementary school teacher with an advanced degree in reading. I taught English for thirty-nine years. I have some thoughts about all this noise which, as always, you can have for free, and which are, I think, worth considering if you're going to get into this ongoing kerfluffle.

One More Explosion of Experts

As with many issues in education, reading is blessed with the expert insights of expert experts who have never actually had to teach a tiny human to read. This group of People Who Have Really Strong Opinions Even Though They May Not Know What The Heck They're Talking About includes, I must sadly note, high school teachers, who move into the house long after the foundations have been laid. Here's the rule-- all reading experts must be able to answer the question, "What happened when you applied your ideas about reading instruction to several different classrooms full of students?"

Reading Is Not Natural

Humans will do language naturally, by which I mean without any instruction. They will learn to interpret what they hear, and they will start to speak it on their own. This does not happen with reading or writing; in fact, most cultures go through a pre-literate stage in which a language exists only as spoken word (when writing appears, you'll find a lot of old farts complaining that Kids These Days can't remember stuff any more and don't spend time spooling off old tales in rumbling verse, but instead waste their time staring at those funny marks on paper).

English Is A Glorious Mess

People who say, "Nonsense. I can teach you how to spell and decode every English word with just five rules" are absolutely full of it. English is a jumbly mess, and that's a beautiful thing, because it speaks to a wild and wooly history. For those of you who missed this day in school, here's the short version:

Around 450 AD the Angles and Saxons kick the last remains of the Roman Empire out of Britain, leaving Romanized Brits and Picts and Celts to welcome their new tribal overlords. We consider this the start of our language (the Angles now lived in Angle-land, speaking Angle-ish--- get it?) This is Old English, a language that is almost completely unrecognizable. Around 800 AD you get a bunch of invading Norse, some of whom settle and bring their language. There's a great vowel shift, when for some reason everyone starts pronouncing things differently, but the real game-changer is the Norman Conquest, after which all the classy people speak French and the vulgar low-lifes speak the descended version of Anglo-Saxon. Anglo-Saxon is relateds to German and Yiddish; French is a degraded version of Latin. Throw in all the other influences and you get a language that is patched together from many other languages, and each borrowed word brings its parent language rules with it.  And all this is beyond the natural shifting of language and the odd effects of things like the fetishizing of Latin.

That's just the overt-simplified version. For solid historical reasons, English is a mess. There's no shame in that, and I'm not sure why it's considered such a big deal to say it out  loud. Every year I would teach this history to all my 11th graders, and you could just see so  many lightbulbs go on in the room as students realized, "Hey, it's not just me!"

Bottom line: simple decoding in English is hard. Harder than decoding in other "purebred" languages. I'm not sure why some people want to insist that it isn't.

Science Is Not Magic

Just because science knows how something happens, that doesn't mean we know how to make it happen. We know a lot about the science of attraction and even love-- this does not mean that you can  just go out and make Padma Lakshmi or Brad Pitt want to marry you.

Your Feels Are Not Magic, Either

Having strong feelings about the art and love of something does not excuse you from knowing actual technique and practical principles. You can have a great vision of a painting, but you still have to know what happens when your brush pushes into certain pigments. I can play a jazz trombone solo because I have technical control (mostly) of the horn. Being able to express your feels or inspiration or instinct is not about the absence of technical knowledge, but about such mastery of technique that it doesn't get in your way (i.e. I don't have to stop to think  about what position an F is in).

Too Many Studies Are Bunk

The problem is that it's hard to determine just how well someone is reading. Every study about a particular approach to reading has to try to measure something-- but what? How well the student says the words out loud? How many details they retain? What higher-order thinky things they can apply? How many multiple choice questions they can answer correctly? And will they demonstrate these achievements immediately, with no time to reflect, or after some time (during which they may forget what theyve read).

Measurement can be hugely subject to reading bias. IOW, someone who thinks that the most important part is decoding may teach the students to decode and then measure their success by giving a test that shows how well the students can decode. But the premise-- decoding is the critical part of reading-- remains unexamined. Tests that focus on comprehension run into a different problem-- test manufacturers who decide there's just one correct way to comprehend a piece of writing.

If I am a huge fan of dinosaurs, I can read a book about dinosaurs cover-to-cover with high levels of comprehension. If all I know is football and all I know about dinosaurs is the word "dinosaur," then that book will stump me. It is far easier to decode a word that I already know or have heard.

Knowing stuff is a critical tool for reading, and no two students have the same body of knowledge. The only way to create a level field for testing is to provide excerpts that no child could possibly have prior knowledge about, and lord knows test makers have tried, but what that gets you is tests that are absurd, like a talking pineapple or asking third graders about trade patterns in ancient Turkey.

The other implication here is that an important building block for reading doesn't necessarily have as much to do with actual reading as it does with providing a student with a rich background of knowledge. Schools that have cut science or history to spend extra time drilling phonics flash cards are getting it exactly backwards.

Too Much Of Anything Is A Mistake

Whatever philosophy one espouses, there is an extreme version of it that is just stupid. DIBELS, the test that checks student decoding skills by having them decode nonsense, is stupid. Whole Language approaches that leave students floundering to somehow absorb meaning through the pores in their fingers-- those are stupid, too.

Asserting that a student must have only one single tool in her toolbox, that even touching the other tools will somehow destroy the effectiveness of the One True Tool-- that's also stupid. And arguing for your personal One True Tool by cherrypicking only the most stupid examples from the other side is, well, stupid.

Also, while we're on the subject of stupid-- it's really hard to get somebody to read, let alone do it in a way that improves their ability, if they are exposed to reading via nothing but painful, soul-crushing, tedious, terrible drudgerious exercises. If you teach them to hate reading, it will be that much harder for them to get better at it, let alone achieve the exalted Life Long Learner status. However, it is nearly impossible to get somebody to love reading if they suck at it. Nobody loves doing things they do poorly, which means that poor readers will have to be coaxed, cajoled, bribed, pushed, encouraged, supported and even dragged through the valley of suckitude before they can learn to love reading (which means what, really? I love reading history and biography, used to love reading SF, and I hate reading technical manuals and bad pop novels). You can say that the love of reading is your instructional goal, but the pathway to that is through getting better at the skills involved.-- which will only be fruitful if that bettering instruction isn't terrible and awful and completely dismissive of the student's individual personality, skills, determination, and interests. So, no, you can't separate these two things.

Likewise, what classroom observations and research have shown time after time is that actual teachers who are actually effective teaching reading are doing some combination of a whole bunch of things. We can give students a variety of tools, and we can give them a setting that fosters growth in the use of those tools, and we can prod and encourage and provide a safe setting for the harnessing of those reading tools to the deeper intellectual tools of analysis and thinking, but as soon as we start approaching students as if they're machines in which every time press Lever X we get Result Y then we are going to accomplish less than we could have. They need the tools to break down the pieces, and they need the tools to see in those pieces a larger, richer pattern of meaning.

PS. Starting them younger and younger will do more harm than good.