Over at Cleveland.com, Rich Exner has done yeoman's work taking Ohio's school ratings and connecting them with census information from the US Census Bureaus 2017 American Communities Survey.

Ohio is another one of those states that believes it can reduce the entire issue of a school's quality to a single letter grade. This is a dumb idea, and there is no state that has ever implemented it in which it did not prove to be a dumb idea. It has been decades since we concluded that reducing student performance to a single letter grade was a dumb idea. How could it not be a dumb idea when applied to an entire complex system that is a school? If we asked a hundred parents what a B means foir a school grade, we would get over a hundred answers because many of those parents would say, "Hmm, well, it could refer to the general academic atmosphere of the school, or maybe how involved students are, or the level of enrichment offered, or, hell, I don't know." 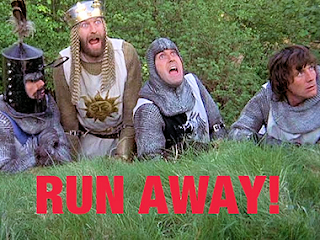 Because giving a school a single letter grade is a dumb idea. Can a school suck in some areas and be awesome in others? Of course it can.

So if this is such a dumb idea, why does it keep cropping up? Well, its advocates have never made a coherent case for the practice (and many reformsters are judiciously silent on the practice), but we can make some educated guesses.

For one, a letter grade makes a nice way to hide the fact that you are grading an entire school based on a single standardized test of reading and math. If you just published the school's average or aggregate score, the public would shrug and say, "Okay, that's one piece of data and I'm not even sure I much care." So we have to dress that score up with a name or designation or, hey, a grade, to make it seem like that single test score is somehow indicative of bigger things, or even to give the impression that the score has been enhanced by all sorts of other measures.

For another, I can't help noticing that school grade states tend to be states like Ohio and Florida, where there are all sorts of folks chomping at the bit to open some non-public schools and hoover up some of those sweet, sweet tax dollars. Only to drive the market away from the public schools and into the waiting arms of charters and voucher schools, you need a way to point at certain public schools and say loudly, "Look! That school is failing. Faaaaiiiiling!! You had better run away! Run away!!" Letter grades for schools are a great way to do that.

Now, I now that I suggested that these grades are meaningless and tell us nothing, but thanks to Exler's work, we know better. Take a look at this graph and see if you can draw any conclusions here... 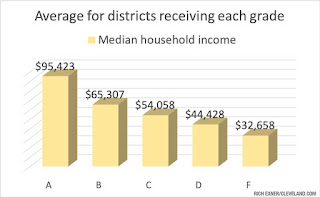 There is also the same sort of correlation for the child poverty rate and the education level of parents.

As with other research that we've seen before, what we learn is that demographic data is so predictive of school rating results, we don't even need to give the Big Standardized Test.

This works out well for reform minded folks, because it sounds nicer than saying, "Let us take over education in the poor communities, because Those People don't have the political clout to fight back."

Click on over to the article and look through all of Exner's data. The only one that will surprise you at all is the graph for the grade based on improving at-risk third graders-- that is just kind of a random splotch. All the rest present the same old picture-- the kinds of measures that are used to grade schools favor schools where the students come from wealthier, more educated families.

And it's worth noting that Ohio has been at this for quite a while-- hell, we all have. Which means that if Common Core college and career ready standards and innovative charters and high stakes testing were going to reverse the effects of poverty, we would see it in these charts. So that's one other thing the data tells us-- by the measures that Ohio is using, education reform hasn't helped a bit.

Most importantly, it tells us that gradiung is schools is a useless exercise that provides no helpful or actionable data, but simply provides one more way to target poor communities for reformsters.