RAND Corporation, with its vision to be "the world's most trusted source for policy ideas and analysis." regularly contributes to the total thinky tank output of material that wants to be viewed as "a report" or "research" or "a study" or "a paper," but is more like an op-ed or blog post that has put on a tie and juiced up its vocabulary.

This week they cranked out a new one entitled "Reimagining the Workforce Development and Employment System for the 21st Century and Beyond." Its scope is fuzzy and wide, like a wooly mammoth that has overindulged in pizza and beer, and while it doesn't lay all the blame there, it does take some shots at K-12 education, and in doing so manages to tick off plenty of the boxes on the Reformster Talking Points Bingo Card.

Authors with no actual background in education? Check, check, and check. (For bonus points, two of the three are economists.) 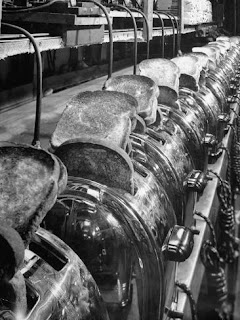 21st century skills? Yep. Employers are "struggling to find workers with 21st century skills that go beyond routine cognitive skills and stock academic knowledge to capture competencies in such areas as information synthesis, creativity, problem-solving, communication and teamwork." Wait-- those are 21st century skills? Really? Communication?? Because it makes me wonder how humanity survived all the previous centuries. On the other hand, I know feel like my colleagues, my college teacher program, and I were all forward-looking savants, given the fact that we were talking about all these things well before Y2K was a bug in a shortsighted programmer's eye.

Schools haven't changed in the last [fill in your favorite time frame here]? Yep. What the reportish thing calls "the current approach" is characterized as "a linear pipeline from kindergarten through 12th grade education to possibly college and then a job" and it hasn't changed, despite "technological change, globalization, and important demographic changes."

Half-baked ideas they read about somewhere? Sure. Hey, isn't gamification a thing? Wouldn't schools better if they did that?

Pitch for personalized learning that goes on forever? Yep. The need to keep training throughout "lifecourse" is necessary because employers need workers to acquire new skills, though not necessarily through any fancy college-type stuff. Quick micro-credentials (yes, check that box off, too) that you can shop for yourself online-- that's the ticket.

Because many jobs of the future don't exist yet. Sigh. Matt Barnum has made a side job out of tracking these kinds of bogus claims, which used to hover around 65% but have been inching up into the 80s. Bottom line: nobody has any idea how many of which jobs will or won't exist in the future.

Education is really expensive! Our current funding model makes us sad, and we would like a new one where if we have to chip in money, at least we get a return (like owning part of the student's work life once they finish-- seriously, they're called "income-sharing agreements"). Also, computers really ought to make the process cheaper. And we like vouchers and other things that at least let somebody profit from all this money we're spending on meat widget development.

Talking about the K-12 education system as if its only purpose is to provide properly-machined meat widgets for corporate overlords? That's kind of the whole point of the reportish thing. This view of education goes hand in hand with the view that education is simple training-- you acquire some skills, some bits of knowledge, and you are trained to do something in particular. But now corporations can't find the selection of meat widgets that they want-- we need a new system.

Data and evidence-based practices? Yes, the system should run on data, using practices that "support monitoring system outputs and outcomes..." And of course all remedies that the data leads to should be scaled up. And information should flow freely (by which we mean information about our company and our meat widgets-- don't be publishing the CEO's home address and phone number).

System thinking? Sure. The reportish thing wants to point in the direction of a system, a technocratic solution that will push meat widgets through a pipeline like toasters through a toaster assembly robot. It's that same old cradle to career pipeline that is supposed to do things like ensure "timely and appropriate matching and rematching of skilled workers with jobs to which they are well suited over their time in the labor market." Phrases like "The framework articulates the overriding goals of the system..." make it seem as if there are no actual humans making these decisions-- it's just The System. Which brings us to...

Most notable is the degree to which this reportish thing and its recommendations are dedicated to absolving business itself from any responsibility whatsoever for helping deal with the issues of the 21st century workforce. For instance, this explanation of the "increased risk on some workers" notes that in today's economy "with the apparent growth of nontraditional work arrangements, such as freelance and contract employment, certain workers are less likely to access the features associated with traditional wage and salary jobs, such as well-defined career ladders and access to fringe benefits to buffer the risks associated with health care needs, accidents, injuries, disabilities, and the business cycle." You or I might think that the next logical thought is "Maybe corporations and businesses should try to do less screwing of their workforce so that people who don't have the good fortune to be born into wealth can have a better shot at a better life. But no:

This places more of the onus on workers to anticipate changes in job requirements, take on the risk associated with poor health or saving for retirement, and bear the cost of job training or retraining.

And nowhere in their discussion of The System that they recommend, do I see anything that suggests that a push for more moral or ethical business leadership might help with some of this. The closest the thing comes is some emphasis on making sure that The System enhances equity, by which it means providing an opportunity for people of all races and backgrounds to become meat widgets that are pleasing to the employers. No, we need a system to help meat widgets better meet the needs of corporate overlords, whose needs are not to be questioned. Hey, they're just responding to market forces and the economy as they must-- it's only the Lessers and future meat widgets who have to make actual personal choices for which they bear responsibility.

It's a discouraging read, but since it advocates for vouchers and choice, it will be lapped up by Certain People. There really isn't anything new here, but an outfit like RAND can put the old wine in fancy new skins. Well, maybe not wine. More like koolaid.