What Did We Learn From DeVos Hearings This Week?

So during Betsy DeVos's terrible horrible no-good very bad week of hearings, what did we learn?

This is the third budget in which DeVos tried to zero out Special Olympics. The third. So why so much fuss this time around? Perhaps because somebody made her go before Congress and explain herself (or not) in some exchanges that made for insta-viral hits.

Just imagine what it would be like if more legislators acted more like actual defenders of public education more often.

Finally, Evidence of the Deep State

Donald Trump stepped in to "override" his people, so the Special Olympics are off the chopping block sooner rather than later (this was a cut that was never, ever going to happen). Then DeVos said she was delighted because she has "fought behind the scenes" for the Special Olympics for years. She's the head of the department, and he's the President-- who put that cut in there if neither of them wanted it? It must be--gasp-- the Deep State, trying to make them look bad by somehow sneaking damn fool items into the budget.

But boy-- for someone who fought for it behind the scenes, she sure stood up for it in front of the scenes.

The Benefits of Big Classes

DeVos touted the advantages of larger classes. This is the second time in one month that a North American education official has tried to argue for this piece of fried baloney. It's an idea so bad that even Education Post ran a rebuttal. But it really should not be a surprise-- reformsters have been arguing for years that we should fire all the bad teachers, gather up all the students in front of the remaining teachers, and maybe pay those teachers more, because a good teacher will still be great if she's teaching a few hundred students. In fact, Arne Duncan thought this was a swell idea.

The actual benefit? Lower personnel costs. Benefits to students? It's easier to hide from the teacher.

For my money, the more important was not the kerfluffle about Special Olympics-- it was the DeVos exchange with Representative Clark, in which Clark took us back to DeVos's safety commission-- the one that was supposed to study the problems of school shootings and concluded that school problems actually stem from Black kids. Clark went back to look at the research basis for DeVos's recommendations and discovered that-- surprise-- it was racist as shit.

Don't expect DeVos to crack on this--she never will. The Secretary stuck with "all children should be treated as individuals" which leaves plenty of room for "if all the Black students in school are individually bad apples, we'll just have to deal with them, won't we."

There were several references to the Network for Public Education report that shows just how much federal money has been lost to fraud and waste through charter school support. DeVos smiled that smile of hers and declared that we need more charter schools, not less. This was the least surprising thing that happened all week.

Betsy DeVos still does not owe you a damned explanation.

I remain steadfast in my belief that DeVosian stonewalling and awkwardness is not because she's a dope. To some degree it's predictable and predicted; remember that DeVos doesn't just have zero experience with public schools. She also has zero experience with situations in which she has to be accountable to others or in which she has to convince people to agree with her using tools other than her checkbook and power. But she's doing God's work, and she doesn't need to explain herself to all these heathens.

And if you've ever needed further evidence of how disconnected she is, watch this painful video of what Anderson Cooper calls an "epic non-answer."

Finally, who wore it best?

And by "best" I mean "a stunned look of disapproval." From the DeVos hearing, we have NPE co-founder Anthony Cody: 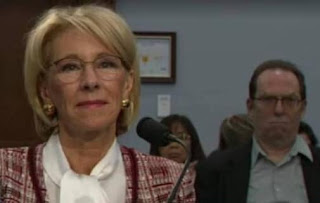 And then we have the Swamp Creatures that descended on the hearing for former oil lobbyist and future Interior Department chief: 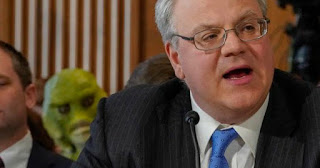 Just a reminder that the USED budget cuts a ton of worthwhile stuff, and will ultimately be decided by Congress. Study up and contact your Congressperson.
Posted by Peter Greene at Friday, March 29, 2019