Can HAL 3000 Take Your Class Notes For You (And Is EdWeek Starved For Story Ideas?)

Can a piece of computer software take notes for students in a K-12 classroom?

Okay, we should be done here, but Benjamin Herold, staff writer,  has posted a curious article at EdWeek. The headline (Could Artificial Intelligence Automate Student Note-Taking?) might have alarmed you if you saw it, but I'm going to explain why you can relax. Here's how he leads off:

Artificially intelligent digital agents are being marketed as a way to automate note-taking in the workplace, raising a big question for K-12:

You'll be relieved to know that nobody consulted for the article thinks that the answer is "yes."

Herold leans on EVA, a digital assistant from a Silicon Valley startup named Voicea (can't somebody give these guys company naming lessons) that can dial into corporate meetings and create transcripts of everything that's said. It can use certain cues to highlight portions, but we're talking transcript here-- not notes. But after explaining the Voicea sales pitch for corporations, Herold notes that  "even Voicea is keeping its distance from the education market." So the company that makes the stuff says "no."

Herold talks to a policy researcher at RAND "who has written about artificial intelligence in K-12. "I applaud attempts to think about applications of technology that can help students take more effective notes and highlight the key takeaways," said Robert F. Murphy. "I just don't know if this particular application is going to provide that." So RAND says "no."

Herold cites new research that suggests that taking notes on a laptop is not so effective, which is... irrelevant to this discussion. But he does spend some time discussing why note-taking on a laptop probably isn't helpful. 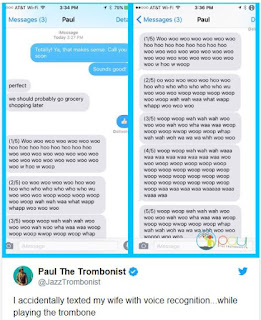 He does include the obvious common sense point here-- that the very process of listening and processing and deciding what is most important and physically writing it down-- all of that is why taking notes works in the first place. Plus, it provides a useful set of notes that can be used to study later. Having a complete transcript of everything-- not so much (this is exacerbated by the fact that in a classroom setting, the AI would have a nervous breakdown trying to process all the noise and voices and noise, producing something slightly more useful than that guy who accidentally texted his wife with his voice-to-text on while he was playing trombone).

That processing is critical in note-taking, and absent in the HAL 3000 Note Taker. The student could fall asleep. The student could stay home and send the AI to school. This suggests that the AI is probably not going to enhance learning.

Maybe Herold was just spitballing, or trying to get way out in front of a possible trend, or stuck with a pitch from Voicea and no hook to hang it on. I don't know. I'm just happy to report that as of right now, nobody seems to think this is really a thing.