In the last two decades of education reform, a great deal of emphasis has been put on sending high school graduates to college. President Obama in his 2009 State of the Union address proclaimed that by 2020 America would "once again have the highest proportion of college graduates in the world" (though he hedged that a bit by later saying simply that everyone would need some kind of post high school education.) We've repeatedly used college enrollment and completion as a measure of K-12 success. While the modern reform movement paid lip service to "college and career," policies have always suggested that college is the superior part of that team. 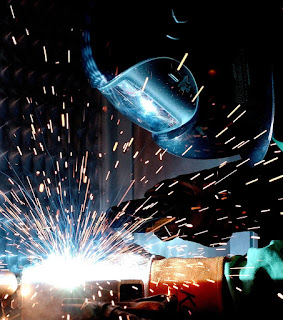 Now it is finally occurring to some folks that A) college is not necessarily the best choice for all students and B) the world needs people who do what Mike Rowe always called the jobs "that make civilized life possible for the rest of us." Done well, new studies show, it can boost both academics and wages for students. It might even help solve the mystery of the missing non-college educated male workers. And so Career and Technical Education (CTE) is coming back into its own.
This movement does not come without some concerns. Mishandled CTE can end up replacing a full education with simple vocational training, reducing public education to a provider of free meat widgets for selected employers, but opening up a limited future for the students who receive the narrow education. CTE programs are most effective when schools partner with relevant industries, but that partnership can't be one-sided, with schools subordinated to HR departments. Badly mishandled CTE can also become a dumping ground for "problem" students, a type of education that some students are encouraged to "settle for" by adults who have decided that the student just isn't smart enough or good enough for college education.
In short, CTE reflects our own culture's conflicted feelings about blue collar workers. On the one hand, we venerate the idea of hard work and getting one's hands dirty during an honest day's work. On the other hand, we tend to assume that someone sitting behind a desk making a six figure income must have some stellar qualities that the hard-working blue collar guy does not.
CTE as a dumping ground for system-rejected students where they can be fashioned into fodder for dead-end employers is a bad, bad idea. Fortunately, because CTE is not a new idea, there are many schools that can show how to do it properly.
I had the good fortune to work in a district that was part of a seven-district consortium operating a CTE school (called vocational-technical for many years, now called a Technology Center) that has been in business for around 50 years. Many of my students over the years attended that school, and it served them well. Here are some of the ways that school does CTE right.
Students attend the Tech Center for half a day; the other half of the day they attend their "home" school. This insures that in addition to the technical education they receive at their shop, they get the same core of academics that all our students study. They don't have to give up their full high school education to get their technical training.
The Tech Center is not a dumping ground. In fact, students who don't maintain good academic standing at their home school lose the privilege of attending at the Tech Center.
The Tech Center is staffed by people who really know their fields, and so the programs have a good reputation for providing students who are well-trained not just in the particulars of their field, but in the work ethics of them. And the learning is hands on. The construction students build a house. The auto body students work on cars that have been brought in for service. Welding students work toward their certification. Students graduate from the program educated and employable.
The experience is not seamless. Within the school, there are people who look down on tech students just as their are people in the world who look down on blue collar workers. And tech students themselves have to navigate the contrasts between two different systems; in the morning, a student may be trusted to operate heavy machinery outdoors, and in the afternoon, that same student has to sit in a desk indoors and ask permission to pee.
But it's a system that by and large works and serves students and employers well. It's not cheap, and it's not easy to set up. It is certainly not setting up a "vocational ed" room in some back hall where students are sent when the school doesn't want to deal with them any more. If CTE is coming to your school district, it could be good news or bad. The trick, as with many education programs, is to look at the specifics and make sure that the program is going to be done right.
Originally posted at Forbes (where it was picked up by Mike Rowe, and don't think that didn't make my day.)