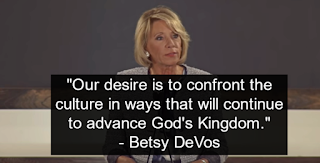 Betsy DeVos is not a dope. I wish more people would see what she keeps putting right in front of our collective face. She has a vision of what education and government should look like, and if it seems that her vision is dangerous and damaging to the world, that does not matter to her, because this world is not her home.
Posted by Peter Greene at Monday, March 12, 2018
Email ThisBlogThis!Share to TwitterShare to FacebookShare to Pinterest