This Monday, Betsy DeVos will be touring a public school in Erie, Pennsylvania (it's an ironic choice, considering how badly Erie's schools have suffered from "choice" and other nifty reform policies). This means that lots of pro-public education folks are mobilizing to make a strong, vocal, public protest in her immediate vicinity. And a lot of other people will be asking the question, "Why bother?'

It's a valid question. And look-- here are some of the things that are not going to happen as a result of this or any other protest:

DeVos is not going to say, "Dang! Look at all; these protestors! All right! You win! I'm going to change the policies I've previously supported because you guys just talked me into it." 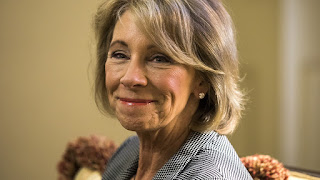 DeVos is not going to go home and think, "You know, one of the things I heard shouted at me, or one of the posters I saw, made me rethink some of the philosophical premises on which I've based my entire lifetime of anti-public ed activism. I think I shall change my ways."

Neither DeVos nor any other member of this administration is going to think, "This is just awful. I'm so ashamed. I'm going to quit."

DeVos is not going to stop and think, "You know-- I really should just sit down and listen to these people. They might have a valid point."

And no DeVos nor Trump supporter will feel one iota less supportive at the end of the day than at the beginning.

DeVos will dismiss the protestors as protectors of the status quo, opponents of Good Change, and generally awful people. She will connect education protests to one of the over-arching narratives of this administration, that only some people are the Real America, and Those Other People are not. That only Real Americans deserve to receive the blessings of this nation, and that the others should stay in their proper place, silent and compliant.

I can offer several reasons.

First, because the alternative is a small or non-existent protest, which allows the administration to push the story that they already try to make live as a lie-- there just aren't that many people who care, aren't that many people who oppose Trump and DeVos and the rest. The opposition is weak and tiny and can safely be ignored or mocked. If nobody shows up to protest, then the feds get to share photos of empty streets and the rest of America shrugs and says, "Well, yeah-- I guess there really isn't anyone who's all that upset with the current trends."

Second, because cognitive dissonance is taxing. Many have noted the DeVosian smirk. It's a smirk that says, "I don't really have to listen to any of this. I'm above this. None of it matters. None of it is real." It's the look of someone who must filter out the evidence of her own eyes and ears in order to maintain her own view of what is happening. This is the work of dampening cognitive dissonance, and as someone who has played that game before, it is tiring. Filtering out all the protestors is tiring. Maintaining the fiction that you are on a mission from God and wise people recognize it and are grateful to you for stooping to better their sad lives-- that's tiring. I don't believe we can get DeVos to change to another track, but I believe we can make it cost to her to hold to the one she's on. When voices get really really loud, you can only block them out by stuffing so much cotton in your ears that it hurts.

Third, if there's one thing I've learned writing this blog, it's that pro-public ed folks, people who have invested their hearts and souls in one of the US's greatest and most important institutions, feel isolated. When you are constantly told that up is down and white is black and that standardized tests are the best measure of children and teachers, you start to doubt yourself. When something is not right, it's important for people to stand together and say, "This is not right." It's important for them to be able to look around and see that they are not alone, that they are surrounded by thousands of people who see what they see. And all the people who can't be there, but watch from elsewhere get that same benefit. Teachers from all across the country can look at pictures of a protest and think, "Wow. It's not just me."

Fourth-- collateral leverage. DeVos's visit is being handled by Mike Kelly, a GOP Representative who is in a tight race and deserves to be defeated for so many reasons. If he's hoping that a visit from a high-ranking DC secretary will help him out, he deserves to learn otherwise.

Henry David Thoreau in his essay "Civil Disobedience" encouraged us to be friction in the machine, like sand dropped into gears. We may not make the machine stop today. We may not end its movement right now. But we make harder to keep grinding away, and that wears it down and brings about its eventual collapse. I believe as an absolute rule in life that you are always either getting better or getting worse, making things better or helping them fall apart. There is no standing still.

My wife and I can't be there Monday (we are visiting family in Seattle-- no doubt DeVos deliberately waited till we were going to be out of town), but if you're anywhere near Erie, you should go. Yes, it will be hard to park, and crowded and messy, and somebody may even stand up and say something stupid that you disagree with. But it's important to be there, to be visible, to be heard. Years from now you don't want to be explaining to someone, "Yeah, I knew it was wrong, but I stayed home and didn't speak up." Public education has been under attack for too long in this country, and people have been too quiet about it. The time to stand up and speak up is now. No, it's not going to suddenly make everything better if you stand up and speak up, but the alternative is to step back and watch it get worse.

Speak out and rally begins at 1:00 on Monday, July 16, outside Pfeiffer-Burleigh Elementary School, 235 East 11th Street in Erie PA.
Posted by Peter Greene at Saturday, July 14, 2018
Email ThisBlogThis!Share to TwitterShare to FacebookShare to Pinterest