What Kind of Teachers Applaud Janus?

I told you they existed, and here's one example, writing out the argument that I've heard before:

Some may call me a freeloader, because the union negotiates my salary each year despite receiving no money from me, but I feel that whatever benefit I receive from this service is outweighed by the fact that the union’s collective bargaining with the district puts me in a position to be unable to ask for extra income for stellar work.

The article, posted at the super-conservative Federalist, is entitled "I'm A Teacher. Here's Why I'm Cheering My New Freedom From Unions." The writer is Sarah Mindlin. Mindlin just finished her first year as a teacher in Las Cruces, New Mexico. She graduated from New Mexico State University in 2014 with a Bachelor in Individualized Studies that included coursework in Kinesiology, Exercise Science, and Elementary Education. She then earned a Master of Arts in Teaching at Western Governors University, an on-line school. Her LinkedIn profile says that she's "knowledgeable and excited about cutting-edge educational technology and self-paced learning."

It's not that she hasn't been tempted to join the union: 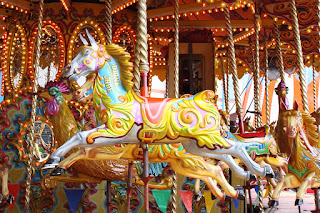 Our students’ lives include single mothers, numerous siblings, incarcerated fathers, domestic violence, drug and alcohol abuse, custody battles, and a rotating cast of stepfathers. The risk of a wild allegation from a parent or family member informs every decision we make, and the union’s assurance of legal and financial support is tempting, even for someone like me who disapproves of the political activities my dues would be supporting.

It's an unfortunate paragraph, suggesting as it does that she considers the need for legal protection given that she has to work with Those People. I'd like to assume that this paragraph is the result of infelicitous composition and not problematic attitudes about the public that she serves.

But like many teacher supporters of the Janus decision, Mindlin lives in an imaginary world.

I don’t think it occurred to me until hearing commentary on the recent Supreme Court case that without the union, I could actually negotiate my own salary with my employer.

Pro-union folks often scoff at Janus supporters as being only too happy to accept the benefits that the union has won for them, but that argument misses the mark, because many of these folks, like, apparently, Mindlin, see the union contract as holding them back.

... I feel that whatever benefit I receive from this service is outweighed by the fact that the union’s collective bargaining with the district puts me in a position to be unable to ask for extra income for stellar work.

Without the union holding her back, she could march into... well, somewhere, and demand a big fat bonus for her outstanding work. Now she can negotiate her own contract, and it's going to be awesome.

I'm not sure what scenario she imagines. She walks into the district office and asks for a bonus and the administration says, "Yes, wow! We'll get you a couple of extra thousand by cutting the pay of Mrs. Chalkdust who teaches next door to you. I'm sure she won't mind and this won't cause any problems at all." Or maybe they'll tell her, "Yes, you have been so tremendous that we are going to ask the taxpayers to accept a tax hike to finance your bonus."

She should probably take a trip to some right-to-work state and check out the many teachers who are now driving Lexuses (Lexi?) and eating caviar because they have been able to negotiate contracts far more lucrative than the union ever did. Or maybe visit Wisconsin where union-busting was simply the opening move in a deliberate program to lower teacher pay.

Fans of bonus pay in education always ignore one important factor. In the corporate world, bonuses are paid because we had a good year, and because we had a good year, we have a pile of "extra" money, and from that pile, we can pay bonuses. But public schools don't turn a profit, no matter how great a year they have, which means that the money for bonuses must come from somewhere else. An easy and common way to manage that problem is to make everyone's base pay lower; that way we can call this bunch of money that used to be part of your salary a "bonus."

Mindlin is also at a disadvantage because she doesn't seem to know how negotiating works:

Most teachers I know and with whom I work go above and beyond their job descriptions on a daily basis, despite knowing they will take home the same paycheck regardless of their efforts. Still, imagine the improvements that could be made to education if teachers were incentivized to go the extra mile and work at their highest capacity in return for more than just a warm fuzzy feeling inside.

Do you see the problem? If in fact most teachers will go the extra mile for a warm fuzzy feeling, why would any employer feel the need to give them money? If you're negotiating stance is "I'm going to do great work for you no matter what, but you should give me more money just because I think I deserve it," then guess how much bonus you're going to get? $0.00.

But Mindlin, like many others, imagines that she has some sort of negotiating power as an individual when in fact she has none. Heck, the very technology-based self-paced learning that she's such a fan of makes her easily replaceable with someone even less qualified. She's a "proud freeloader" because she thinks the union is depriving her of awesome bonuses and performance-based raises that she (who has exactly one year in the classroom) is certain she would be raking in. Oh, honey. You're so cute. Check back in a year or two and let us know how that self-negotiated contract thing is working out. I'm sure that in New Mexico, where teacher retention because of low pay is already a problem, districts will be falling all over themselves to shell out big bonuses for educators. And in ten years, when you're still making what you made this year, we can talk some more about the days when that mean old union forced you into a salary schedule.

People like Mindlin exist, and they're going to be leaving the unions in droves. It may be that nothing except an unpleasant collision with reality will bring them back, or they may never come back at all. But it will certainly take more than a pushy email or phone call from the union to bring them into the fold.

In the meantime, here's a fable. Once upon a time, there was a beautiful carousel horse. She had flowing hair, a beautiful saddle, and lovely shining decorations. When a child climbed up on her back and the music played, she would glide up and down, up and down, racing forward, the wind running through her mane. But the carousel horse was discontented. "If only," she thought, "I didn't have this big pole running through my belly. I feel that it's holding me back, and if I could get free of it... My mane is so beautiful and my saddle is so shiny, I just know that I could run so much faster than all these other horses." One day a man came and liberated the carousel horse, removing her from the post and leaned her up against a shed beside the carousel. At first she was very happy, excited about her new freedom. But then the next day the carousel started up, and the children climbed onto the horses and the music began to play and the carousel horse didn't move at all. The carousel spun past her, but she didn't move up and down, and no wind blew through her mane, and no children came to ride on her. She had failed to realize that what she thought was holding her back was actually carrying her forward.