It's a short news brief, but worth catching.

According to Politico this morning, DeVos had a meeting with the Congressional Hispanic caucus (not on her public schedule) which yielded this comment from Rep. Joaquin Castro (D-Texas): 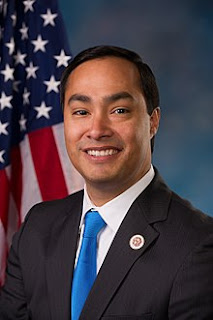 “The Secretary’s primary focus is school choice,” Castro said. “However, her statements did not encourage us that the Department of Education has a strategy — or much desire — to earnestly improve the existing public school system. We are not interested in siphoning money from public schools to prop up a shadow system that includes private, for-profit schools.”

Castro chaired the meeting and said he appreciated the visit but said they still have a "fundamental disagreements on how to best prepare kids for success in life, and the critical role of the Department in making our public schools stronger."

Castro has a mixed record on education issues, with strong support for the public system, but also strong support for the whole standards-and-testing mess. And the Castro brothers (a rising Texas brand) have been pretty friendly to the charter sector in the past. He's a successful Democratic politician in Texas, so that's an achievement in itself, but I also note that his quote opposes "for profit" schools, and as we've noted before, a non-profit charter is just a for-profit charter with a good money laundering system.

DeVos's office followed up on the meeting by saying "Glad for the meeting blah blah blah choice students." I may be paraphrasing a bit.
Posted by Peter Greene at Friday, July 27, 2018