Why Ed Tech Can Bite Me

Here's a story, so that I can make a point. 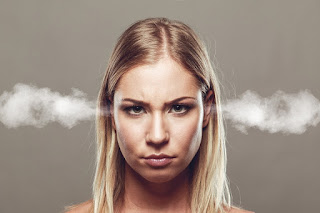 In January, after a month of research, I bought a new desktop computer (I thought that, for a change, I'd replace the old one while it was still merely wonky and not completely dead-- so, about six years old). Transfering files etc from the old computer was its own little adventure, involving some cloud storage, some wrestling with an external hard drive, and many hours of getting things organized. But then one day, the built-in webcam simply ceased to function (actually, the computer couldn't "find" it). Research told me that 1) this was not an uncommon issue and 2) nobody knew a reliable way to fix it. I carved out a couple of multi-hour sessions with various tech support folks, but ultimately ended up restoring the computer to out-of-the-box condition, meaning that once again I had to work through transferring files (I( attempted to save the new computer's files to cloud storage so that the process could be shortened, but it turned out later that it only looked like files had been saved to cloud storage-- or rather, only the files, but none of the contents).  So that process started all over again. Things ran fairly smoothly until two days ago, when the camera disappeared again. Last night, grumpy child in my lap, I attempted another tech support session (this time via chat) with a technician who became a bit irritated with me because after two hours, I couldn't stick around for other conversation about what we would do (he had arrived at the conclusion that the computer would need to be reset again, and I said that was unacceptable). I did get an email indicating that a work order would be sending a ship-to-factory box to a man with my name in some other state. I'm now recognizing that I will have to set aside some portion of my Saturday to further pursue getting the computer to do simple things that I bought it to do.

This is not an atypical experience. I will spare you the long story of my quest for reliable internet connection (almost all local providers get into the house via phone lines, and the phone company informs me that there's an issue with the main line on my street, which is why my internet tends to go out when it rains).

I am not a Luddite or a technophobe. I'm comfortable working with software and dealing with drivers and have even dived into registry to fix a thing or two. And I'm appreciative on a daily basis for the miracles that computer tech makes possible.

But I do get tired of the expectation that keeping these things working should be a part time job, or that when I buy equipment, it will probably function as it's supposed to, but maybe not. And maybe I'll be able to get ahold of someone who can actually help me, or maybe I will have to wade through three-to-ten levels of people who are reading off the exact same troubleshooting guides that I have already tried and they didn't work and that's why I'm calling you in the first place! I have a tablet that "lost" its wifi connection, so I now use a usb wifi connector, but for some reason I can only get to certain websites, so there's one more item on the To Do list for computer maintenance in my home.

It really does spur me to an unreasonable level of rage. I don't really have the hours in the day to work as my own IT department full time. I don't want to scour the internet for solutions, and I don't want to to carve out three or four hour blocks of time to wrestle with customer service-- particularly when they don't have any answers.

And everything I've said goes double-- triple, or quadruple, even-- for my classroom.

If you want to sell me some ed tech, my first question will be, "Will this work 100% of the time for 100% of my students?" Any answer that is not "yes" is automatically "no." In that case, I'd like an estimate of how many hours I can expect to lose trying to make it work.

On some other day, I'll be glad to take a more nuanced look at this issue. But I'm not feeling nuanced today (see above long angry paragraph) and if you are one more ed tech provider anxious to sell me a product that will probably work most of the time for some of the students, probably, with the possible assistance of tech support that may or may not know what to do, then you can stick your software where the internet doesn't reach. Go back to the lab and get your tech to do what it's supposed to do under real world conditions at least 99% of the time, and meanwhile, you can bite me.
Posted by Peter Greene at Wednesday, April 04, 2018