At Ed Reform Now, Chad Aldeman (Bellwether) has revisited a chart from three years ago which shows a shift in our country's education level. Here's the chart: 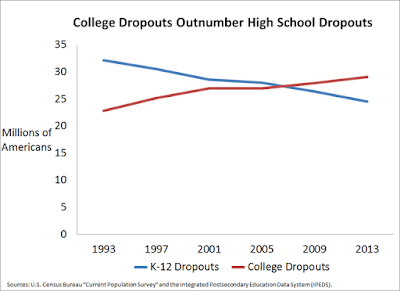 The data actually are about two questions-- how many people over twenty-five have "less than a high school diploma" and how many people over twenty-five have attained "some college,. no degree." That means the chart has a double lag-- it was completed with 2013 data, and that data from over-twenty-fives would cover choices that people made 5-10(ish) years prior to that. That may make some of the specifics open to debate, but the lag doesn't really change the obvious long term trend.

Assuming that this trend has continued for the last five years, we now have more college dropouts than high school dropouts. Interesting factoid-- but what does it mean?

That's certainly a possibility. If the infamous bell curve is to be believed, there will always be a certain percentage of students who will be on the lagging end. That does raise a question though-- the above graph is based on raw numbers rather than percentages. Now I'm wondering what the chart looks like if we run percentages rather than raw numbers.

2) The ed reform crowd has mostly ignored higher education. Aldeman wants to see more "external pressure" brought to bear on colleges and universities rather than letting higher education be driven by its own internal concerns.

This raises a question as well-- what external pressures should reformsters consider, given their less-than-stellar success from bringing external pressures against K-12. Furthermore, the central thesis of K-12 reformsterism has been finding ways to unleash market forces in public education, and when it comes to higher ed, market forces have already been running loose since the invention of dirt. Aldeman, like many reformsters, complains that colleges face "almost no accountability" for student outcomes, but colleges and universities face exactly the kind of market-based accountability that reformsters have sworn would fix K-12 public ed if given the chance. The ed reform crowd will have to make up its mind on this one.

I'll get to Aldeman's third point in a moment, but let me offer some other observations of my own first.

The chart can be read to mean that we have delayed the moment when a person gets off the education train. In other words, folks who used to drop out of high school now hang in until they're partway through college. That's not a terrible thing.

And the big question is why folks are dropping out of college. As Aldeman told me on Twitter, there are many reasons (academics, soft skills, bureaucracy, finances, etc) and no single silver bullet to fix them all. But if we think people should be sticking around in college until graduation, we'll need to narrow down the issues and address them.

Aldeman's third point adds a new possibility to the list. Well, it's new for an ed reform guy to mention it-- some of us have been pointing this out for years.

For example, we’ve enacted a number of reforms over the last 10 years in the name of “college- and career-readiness,” but we failed to make the link to higher education and we forgot that colleges determine which students are college ready. Colleges and universities never signed on to the Common Core movement in any meaningful way...

Yup-- since the day Common Core was introduced through the day when the term was deemed toxic and replaced with the coded phrase "college and career ready," standards champions have insisted that these standards would make all students ready for any major at any college or any career. That's a ridiculous claim (see also Arne Duncan's promise that we would be able to tell an 8-year-old if she was on track for college), and it always has been, rendered even more so by the fact that standards champions have never ever offered a shred of credible evidence that their standards would, in fact, prepare students for college. And now look-- further evidence that they don't.

"College ready" is a complicated and complex condition that exists at the twisty intersection of specific student goals, the specific college, the specific field of study, the specific cultural and family background, the specific financial issues involved, and a dozen other specific factors. Saying someone is "college ready" is like saying that somebody who's currently single is "marriage ready"-- while we can identify ready and not-ready at the extreme ends of the spectrum, most of the scale is taken up by a big, fat, grey middle. One-size-fits-all solutions are actually one-size-fits-nobody solutions.

Aldeman calls the issue here "myopia," and I think that's generous. A key component of ed reform has been the insistence that we can see and predict things that we can neither see nor predict, to insist that we have a system by which we can know things that cannot, in fact, be known. If we want to help more people get through college, step one is to stop trying to dress them in the emperor's new clothes.
Posted by Peter Greene at Thursday, April 26, 2018