No real surprise here. It was only a matter of time (minutes) before someone used the teacher strikes in West Virginia et. al. as an argument for school choice. 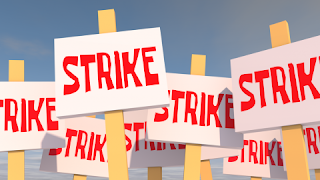 Here's Tillie Elvrum at Campbell Brown's The74. Elvrum has been a school choice advocate for a while, serving as the president of PublicSchoolOptions, a group that doesn't just support school choice, but is all in for cyber schooling. They run a Bootcamp for parent advocacy. They are also unusual in the choice arena in that they advocate for the removal of "access barriers" that keep some students from being able to choose charters. That seems linked to Elvrum's own story, which is that her child with special needs got the help he wanted at an on-line school; it's hard to predict how many other charters would have found a way to push him out.

At any rate, she has made it clear why public schools are awful-- that damn teachers union. And she is consistent in her blaming. The strike in West Virginia is not a teacher strike- it's a "teachers union strike." When his son was kept out of school by a strike, "the demands of the union kept him from his most basic need" also described as "when the unions in Pennsylvania walked out on my son." The ugly tug-of-war that happens at these times? That occurs "when unions force teachers to walk out of classrooms."

This is the classic argument-- teachers and the teachers unions are entirely different things, with teachers somehow at the mercy of union decisions that are made by....? I don't know. Evil union officials who all have some secret power over the rank and file?

Elvrum is painting a picture that is not particularly representative of reality. Teachers don't like to strike, and when they do strike, it's because they feel they're out of options. Teachers certainly don't strike because the union says they have to. In fact, if you think teachers meekly follow union orders, check out the number of NEA and AFT members who voted for Donald Trump. I can assure you-- all fifty five counties of WV don't walk out on strike because the union says to-- they walk out because the individual teachers have had it. [That's why it's called a wildcat strike-- because they walked out in spite of the union, not because of it.]

But some reformsters find the Evil Union narrative useful because it supports one of the charter/choice selling points-- come to our school, where there is no evil union and teachers just do as they're told. The Evil Union narrative also goes along with the idea that real rank-and-file teachers feel a special sacred calling to their work and never trouble themselves with vulgar concerns like how much they get paid or whether they have insurance or the conditions in their building. It's the union that puts those thoughts into our teachers' heads. Those nice ladies would be happy to work for a baloney sandwich and a pat on the head if some Evil Union guy wasn't whispering in their ears with indecent suggestions about decent pay.

Like many anti-strike arguments, it allows some folks to pretend that everything is okee-dokee in teacher land and that nothing needs to be addressed, which when you think about it is a really ironic argument for an ed reformster to adopt since it boils down to-- our schools are a terrible mess and don't serve our students well and need to be completely overhauled, except for the parts having to do with teachers, because those parts are perfectly perfect. Lots of reformsters are smarter than that, but those that aren't at being flushed out of the brush by the new wave of strikes. They don't have a lot to contribute to the current conversation, but it is useful to see their argument fully revealed.
Posted by Peter Greene at Monday, April 09, 2018