From the moment she became late night sketch fodder, Betsy DeVos has become something new in the world of education secretaries. 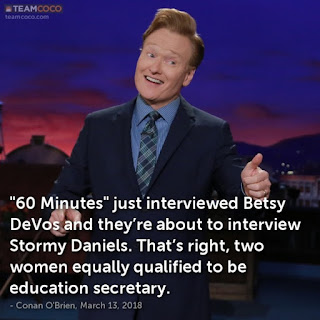 I doubt that the average citizen could name five education secretaries-- maybe not even three. But they know who Betsy DeVos is. She's been Kate McKinnoned multiple times on Saturday Night Live.  She's been a punchline repeatedly on late night tv She's used as an ancillary punchline-- in other words, not as the main part of a joke meant to skewer her, but as a useful barb to skewer someone else.

And the DeVos jokes just keep spreading. If you like to waste time sample the culture on YouTube, you may be familiar with the "Everything Wrong With..." series of videos that snarkily pick part various movies. Yesterday they released their clip picking apart The Shape of Water, and smack in the middle of it is a DeVos joke. If you want to see it for yourself, skip to about the 7:13 mark.

The joke is pretty simple. They run a quote from the movie in which the Evil Russians say, "We don't need to learn, we need Americans not to learn."

DeVos is literally a punchline, one considered so reliable that there's not even an explanation attached. It's just one line in one video, but still....

I've written before about how I think it's a disservice to the cause to dismiss DeVFos as a dope-- she's no dope. But there's definitely something curious going on when 1) regular citizens know who the secretary of education is and 2) that secretary is widely understood to be anti-education-- even by people whose understanding of the issues is, shall we say, a bit shallow.

But this is where we are. The United States Secretary of Education is a punchline. Good luck to us all.

Posted by Peter Greene at Friday, April 20, 2018
Email ThisBlogThis!Share to TwitterShare to FacebookShare to Pinterest