From the moment at her confirmation hearing when she fumbled the question about IDEA, Betsy DeVos has faced a huge disconnect between two impulses.

One is the impulse to make sure that students with special needs get the services they need. I've read enough to believe that DeVos is essentially sincere on this point. But it runs smack into her other impulse, which is that the government shouldn't tell anybody how to do anything.

This surfaced in her recent speech at Jeb Bush's Charterpalooza. Now here it is again at EdWeek, in a special commentary about students with special needs. 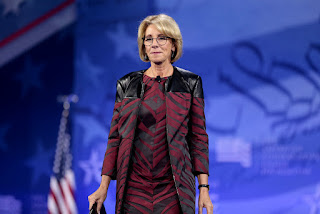 DeVos is spinning off the Supreme Court decision about Endrew F., a student whose parents wanted more than the "de minimis" offered by their home school district. They went to court to have the district pay for a more appropriate school setting for their son, and won, mostly. As an extra prize, they won the chance to become propes in DeVos's pro-choice arguments, a position that they have forcefully declined. But DeVos has kept it up anyway.

That's a noble position, and in many ways superior to the Duncan position that all effects of special needs could be erased by the power of high expectations (though she kind of believes that, too). It just doesn't fit very well with the rest of her plans for education. It's nice to say that failure is unacceptable, but unacceptable to whom? And who is going to make the school do something about it, if the government's position is that they shouldn't be strong-arming anyone?

First, if the government is going to dump a bunch of regulations and barely enforce the rest, exactly who is going to insure that students with special needs aren't failed? From her confirmation hearing onward, DeVos has consistently refused to envision a scenario in which her department would step in and tell a school, "You can't do that." So wishing for equity and extra effort and appropriate programs for students is, without the weight if any enforcement behind it, just wishing.

Second, DeVos thinks this is an argument for choice. It isn't.

Every family should have the ability to choose the learning environment that is right for their child. They shouldn’t have to sue their way to the U.S. Supreme Court to get it.

She repeats this line from her Charterpalooza speech, and it's a line that's thick with irony. Because, of course, if Endrew's parents were unhappy with the program offered him at a charter or voucher school, they couldn't sue anyone at all. The charter operators could simply smile and say, "Well, if we aren't satisfying your requirements here, you are certainly free to vote with your feet." And then they could point at the door.

Students like Endrew are expensive to educate. That was kind of the point of everything that led his parents to the Supreme Court. Charters are businesses, and as such, they have to make prudent fiscal decisions, and every business that ever existed learns that some potential customers just aren't worth it. Every business makes a distinction between customers they'll try to collect, and customers they will deliberately try to NOT collect. There is no business model based on providing goods or services to every single potential customer-- not for individual businesses or for whole industry sectors.  For charter schools, high needs, high cost students like Endrew are not desirable-- and right now no court in the land can force those schools to properly serve a student like Endrew.

Endrew was fortunate that his parents found a school that could help him. But not all students with special needs will be so lucky. So what happens to a student that nobody wants to serve. If the public school is so strapped for resources, hollowed out by the costs of charters, and no charters are willing to accept that student, then what should the parents do? And exactly who is responsible for that student?

Students with special needs represent a special challenge. They are in danger of being more marginalized as more folks push the idea that schools are job prep centers, aimed at making every student a valuable asset to a future employer. But some non-zero number of students will never meet that standard. If we are evaluating humans strictly on cost-benefits basis, some students will cost far more to educate than they will ever put back into society. But those students are still someone's child, and they are still capable of love and kindness and everything that makes being a human more than just being a useful meat widget.

In any choice system, certain students-- some special needs, behavioral problems, low function, etc-- will be the hot potatoes. Nobody in the marketplace is going to want them. Betsy DeVos thinks a choice system is a perfect way to serve those students, but she's simply wrong. That's because in a choice system, the choice belongs to the school, not the parents. Providing choice without oversight, without attaching either funding or mandates to certain students, will create a system in which some students are well served and some students are out in the cold. If the public school system is the only school being told "You must educate these children" even as they are being stripped of the resources needed to do the job, those students will be abandoned in a mess that even the Supreme Court can't fix.