What's good for General Motors is good for the USA...

That quote is usually attributed to Charles E. Wilson , who served as both head of General Motors and the Secretary of Defense in the 1950s. It's not exactly what he said, but history sometimes edits people's best material. 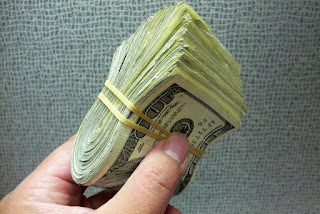 It's been on my mind lately because I keep hearing "Makes Business Sense" as an ultimate argument in favor of all manner of things. "New Neutrality should be killed because it makes business sense," has been dropped into a couple of conversations. MBS has appeared in discussions of the GOP tax cut. And of course MBS appears in discussions of charters and vouchers and running schools more like a business, so that they will make business sense.

MBS does not appear as an intermediary argument, a structural point that we descend past as we work our way down to foundational ideas. Instead, it is meant as a final clincher, the giant-killer, the point which will brook no further discussion. It is the visible nose of the giant beast that has snaked its way into our national discourse-- the idea that there are no values greater than business values.

I am not enough of a radical to reject business measures and values and sense entirely. I don't imagine a world where money just sort of magically appears and then a wise and benevolent government parcels it out. Business sense has its place. For instance, expecting people to give up all their time and talent for free is a bad deal. If you want your favorite band to keep making music, pay them. If you want your favorite local business to stay open, go there and give them your money in exchange for whatever it is they offer.

In short, MBS is a great way to run a country.

What I object to is making it the guiding ethic of an entire nation.

It makes business sense to let poor people die from whatever illnesses they happen to contract.

It makes business sense to provide goods or services tiered according to how much particular customers are, or are not, worth your time and bother.

It makes business sense to get rid of the messy noise of democracy and replace with clear, decisive leadership from one all-powerful executive.

It makes business sense to work the market. There is no such thing as a "free" market-- all markets are maintained and regulated by governments, and those regulations determine in whose favor the market will be tilted. There are practical limits to the tilting-- tilt the market too far in the customers' favor and no business will want to provide the goods and services that people need, but tilt it too far in the business's favor and the people will become so impoverished and desperate that the business will have too few people left to serve as customers (and too little stability left to function safely in the country).

But it makes business sense to get government to tilt the market as much in their favor as they possibly can.

Business sense is amoral, as lacking in ethical sense as the laws of physics, with no more moral compass than an actual compass. And that's okay, I think.

But my question is this-- why should business sense become the predominant sense of a civilization?

Why should business sense supersede religious sense, or humanist sense, or a sense of responsibility to fellow humans?

How can the answer to, "Well, we could do that, but it would wrong. It would be immoral. It would unnecessarily damage our fellow citizens"-- how can the answer to that be, "Well, it would make good business sense." Why is the right of some people to make money-- more money, and more money still-- why is that right greater than the right to life, liberty and the pursuit of happiness? At what point did America's major guiding virtue become, "Well, it makes good business sense"?

It has infected everything. Business can bring the economy to its knees, but actually, seriously punishing it didn't make good business sense. And sectors like health care and education must be made over, because they have too long been governed by people who are following some compass other than the good business sense, and so, obviously, without discussion, without evidence, without examining the premise of the argument, we must believe those business senseless folks as wrong. And this isn't over. Social security, medicare, other programs that were once proud expressions of a sense of moral and ethical responsibility to and for our fellow citizens? Those must also be beaten bloody with the club of business sense. There is no part of the commons that has not been marked for having its moral sense stripped so that someone can inject it with business sense and squeeze money out of it. It has even infected some churches; where once they could be counted on for some sort of moral sense, we now find that many have replaced moral sense with business sense-- God wants to reward some people who are worthy and He will do it by making rich those who display proper business sense.

It is the cult of Ayn Rand, whose only moral guide is, "If I can't get something out of it, then screw it."

Incidentally, poor Charles E. Wilson has been misquoted. When he was asked to divest his holdings so he could take a cabinet office, he expressed his surprise that there could be a problem "because for years I thought what was good for our country was good for General Motors, and vice versa." It's perhaps a not-very-enlightened notion, but compare it to the modern notion which is not that divesture would be bad for the country, but that any official should be able to enrich himself through holding public office because, after all, it's just good business sense.

The free (sic) market and business sense are a lousy way to deliver education and health care, and they are ill-suited for a host of other functions as well, but we currently seem incapable of remembering that there any higher values than providing some people the chance to make a buck. Even education reformsters who have a sincere desire to make education better (and, yes, I do believe such beings exist)often buy into the business sense ethic-- if it makes good business sense, then surely it will make good educational sense as well.

But it's no way to run a country. Good business sense is a lousy moral compass. I don't want to destroy it utterly and remove it from all aspects of life. But I do want to see it subordinate to moral, ethical and democratic values. Yes, I know there are huge differences of opinion about what exactly those are, I don't care. I'd rather have robust arguments about how to best take care of each other, of how best to pay off our debt to God/the universe/what have you then listen to more hollow arguments about whether or not something makes good business sense. That would be good for the USA.