If you live outside of Florida, you may not know about Shawn Frost. But like much going on in the educational swamplands of Florida, this is a story worth paying attention to, because some version of it may be coming to an election near you.

So who is Shawn Frost, and how did he get to be a big name in Florida education?

Well, Shawn Frost is this guy: 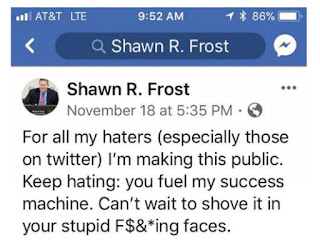 This particular Facebook post has since been removed, but it seems to capture Frost's special je ne sais quoi.

Frost is currently a member of the Indian River County School Board. He wanted this seat, badly enough to leave his wife and children back in their home at Vero Beach, FL (still listed as his "where I live" on Facebook), and move into a room above his parents' garage to meet the residency requirements (all of this was hashed out in court, ultimately in Frost's favor).

The seat that Frost ran for in 2014 was the seat held by the president of the Florida School Boards Association, a group that Frost and like-minded folks consider a bit too chummy with the public education system. Frost has been (according to Facebook) a marine, a science teacher, and a senior project manager at EFront, a software learning management system. And according to a Frost-boosting profile of Frost, he works with business start-ups.

That glowing profile was posted at the website of ExcelinEd, the newest incarnation of Jeb Bush's Foundation for Excellence in Education which has long been the heavy hand reshaping the Florida education biz into something more appealing for profiteers and less useful for actual students. And the occasion of the profile was another of Frost's achievements.

Remember, Frost and friends didn't much care for FSBA. But booting the FSBA president out of her seat was not enough-- Frost decided to round up some like-minded reformy board members and create a new group-- the Florida Coalition of School Board Members (FCSBM).  In particular, FCSBM is unhappy that FSBA is trying to stand in the way of the Florida legislature's various reformster-feuled proposals, going so far as to drag the state into court. Because when local school districts are attacked, they should welcome their dismemberment and defunding graciously, I guess.  Oh, and the FCSBM address for incorporation was Frost's Vero Beach home.

So how did a carpetbagger manage to unseat the head of the state School Board association?

With some pricey help. We'll get into how some of this was spent in a second, but here's a char that breaks down the financial backing for Frost's campaign.


That's the American Federation of Children, the group that, in 2014, was still being run by Betsy DeVos, was tied closely to ALEC, and was funding reformy candidates left and right. Well, actually, only right. Here's how the Indian River Guardian reported on the race:

Frost, a newcomer to local politics with some questionable residency qualifications, (See: Frost says he is living in garage apartment at his father’s house in District 1), defeated Brombach 54 percent to 46 percent. In addition to being helped by local, though nationally funded, attacks on Brombach, Frost was helped by a flood of additional attack mailers, all paid for by the Florida Federation for Children. More outside help came from individual contributors to Frost’s campaign. Some two thirds of the direct contributions to Frost’s campaign were from out-of-state donors.  In the reporting period ending August 18, Frost raised $6,340, $5,500 from out of state contributors, including several described as “venture capitalists.”

Frost has actually announced that he will not seek another term on the school board-- because he has bigger targets in mind:

I have to choose between reform on a small scale — Indian River County — and reform on a larger scale…I’ve chosen to focus on the state level.  I will be joining, hopefully, the state board of education, and working on those constitution amendments over the next year, and that won’t leave time for running for office.

And there it is. The reformster pattern is to get your foot in the door-- any door-- and just keep failing upward into positions of greater and greater power. And now Florida is looking at one more anti-public-ed person in a position of power in their state.

I'm in Pennsylvania-- I really don't set out to spend so much time and attention of Florida, but they just keep providing examples of the worst of what can happen when the public school is under attack, and while I believe there are reformsters out there who are actually motivated by concern for students and education, none of them ever seem to turn up in the Sunshine State, so the attempts to carve up public education are just so... naked. In the other 49, we just need to keep paying attention. And if you're in Florida, God bless you, good luck, and make some noise (there's even a facebook page).
Posted by Peter Greene at Monday, December 04, 2017