My first long-term sub job was finishing the year for a teacher who had passed away in her sleep. Her school-age daughter went to wake her, and she was just... gone. This was at my old high school, the school where I now work. I knew the woman, her co-workers, many of the families of the students. It was April, and my job was to coax grieving eighth graders into a classroom that would, for them, be haunted.

I have only encountered the death of a still-working teacher a handful of times in my career. Some hit closer to home than others. My friend Susie and I went back to Fourth Grade together. A gifted performer, she went to college to train professionally and spent a few years criss-crossing the country with professional touring companies of major shows. Eventually she decided that was not the life she wanted; she came back home and took a job as a high school chorale director. She enjoyed it; she was good at it. Then she discovered the cancer. 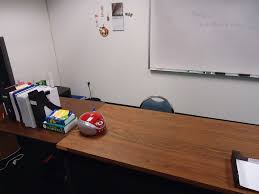 She worked as long as she was able. One door of her choir room opened directly to the side yard of her school; while she was doing chemo, she would step outside between classes, throw up, and then go back to work.

It's hard on students. Of course, it's enormously hard on students when other students die; when you're a teenager, you don't think about the limits of human mortality very often. But the death of a teacher packs a different punch, perhaps because they mostly don't think of us as humans, exactly. They think of us, expect us to be, immovable pieces of the landscape, as intractable as the ground they stand on. When a student dies, they feel a shudder in their own hearts; when a teacher dies, they feel the earth shift under their feet.

So that's where we are today in my building. A colleague I have taught with for over twenty years is gone. He had battled cancer for a few years now, and in fact had left the job a few weeks ago when his doctors told him he was almost out of time. The students didn't know that; they figured he was just getting healthy again, and would be back in his room, at his desk, again.

He was a former marine who returned from service and got a teaching degree. I can't say that he was the greatest teacher who ever set foot in the building-- we taught in adjoining rooms for years and to this day, most of what I know about National Lampoon''s Christmas Vacation I know from hearing the movie blaring through from the other side of the wall. His teaching methods were very different from mine, and not methods I'd endorse for anyone.

But he cared tremendously about the students. He coached runners for his entire career, investing himself in their efforts. He ran with them until he couldn't any more. He hosted the team at his house for big team meals, even after folks told him, "You know, you really shouldn't do that." You could count on him to show up to chaperone every single school dance. This fall, he defied doctor's orders and with his family keeping watchful eye, traveled to states to support one of his runners. He was a quiet, private person, but the students felt real affection for him. Their teacher-radar told them he was all right.

His obituary is in this morning's paper, and at the beginning of the day we will each read an official announcement from the school. His students will understand that the sub they've been with for a few weeks will now finish the year with them; God bless him for handling that gig. Some students will cry; some will go to the guidance office to take a moment. Many will show up for visitation tomorrow, maybe even the funeral. I will set this to auto-post  later, so that I don't get myself all emotioned up before I work with the students.

Years ago they started telling us that when a student dies, we should just leave their seat empty in the classroom, that students find it disrespectful to "erase" the lost person. I suppose an empty teacher's desk is a similar matter. Hard to say. We haven't been through this many times. Teachers usually retire before they pass, fade from the collective memory of the school they served, move on to some other place in their lives. For those who pass while still in the job, it's different. They will never not be teachers, and their place will always be in the classroom, there, at that empty desk.

This is why education is properly about the big things-- how to be more fully yourself, how to be fully human in the world. Because life is short, and people die, often unfairly and almost always before their work is done. Be kind. Be better. Remember, you only have so many chances before the desk is empty.
Posted by Peter Greene at Thursday, December 14, 2017