Schools have always been a visible symptom of whatever has ailed United States society as a whole.

When we explicitly valued mostly only white men, we only educated white boys. When we were resistant to waves of immigrants, we ran parallel school systems for them. And as long as we have been mired in racism that is steeped all the way down into our systems, our schools have displayed the symptoms of the racial divide.

We have occasionally tried to treat the symptoms that manifested in public schools. We made the effort (which in retrospect seems almost charmingly naive) to combat racism by desegregating schools. But in many places that led to segregation just being institutionalized in other ways, like segregation academies and mass firings of black educators. When you only treat symptoms, the disease just keeps finding new ways to manifest itself.

Treating symptoms can be necessary-- if someone has sliced open your major arteries, stemming that blood flow is a big priority. But it's not the solution. Your medical goal is not simply to find something that will staunch the flow, but to stitch up the wounds themselves. Your bigger goal is to get the person with the knife to stop stabbing you.

If you are coughing a lot because of your growing lung cancer, the best medical treatment is not a powerful cough suppressant. If you have an abdominal tumor, the best treatment choice is not a compression belt to hide the swelling.

Nowadays, we face a massive yawning Jupiter-sized gulf between haves and have-nots in this country (check these charts). And so, our school system is a visible symptom of that problem. Rich folks get rich, well-financed schools. Poor folks get run-down, poorly-supported schools. And policy decisions are driven by a bunch of rich folks saying, "Well, I don't want the government taking money out of my wallet to spend educating Those People!" Throughout the country, we have a handful of very rich people who have collected power and money in enormous amounts, while nearby (but not TOO nearby) we have people who are struggling to make ends meet, always just one health crisis or personal crisis away from disaster.

And yet, somehow, we're being sold the notion that it's schools that have the problem. 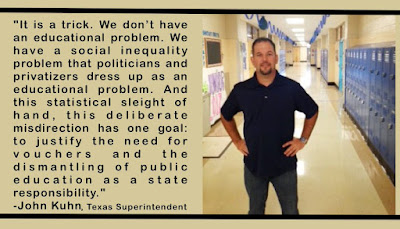 John Kuhn's quote captures the issue. Schools always reflect the symptoms of society. Those symptoms need to be treated, because our most vulnerable citizens are directly in their path. We have an equity problem in this country, and we have a dismantling-democracy-and-selling-the-pieces-to-private-interests problem as well. These problems infect our health care, our legal system, and, increasingly, our government itself (what else has Trump done except privatize the presidency). Of course they infect our education system as well.

We should always strive to make pubic schools the best expression of our national ideals that we can. But when we have trouble living out those ideals as a country, we cannot be surprised that schools reflect the same problems.