Arizona is one of a handful of states that owe a debt to Florida; were it not for the Sunshine State, Arizona would be a strong contender for State Most Hostile To Public Education. And now their governor is sticking it to teachers yet again. 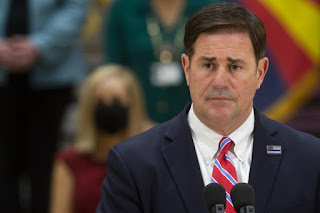 Arizona has a long-standing problem with convincing teachers to work there; they are one of the states that was recruiting folks from the Philipines to fill teacher positions. Their teacher pay stinks, and their actual money spent on students stinks as well (in 2015, per pupil spending was at $3400). Governor Ducey turned to public education demolition experts like Paul Pastorek (obliterator in chief of New Orleans schools) and Joel Klein.

Arizona is a great playground for charter profiteers (just gut public schools to make privatized options more attractive). They have long hemorrhaged teachers from their workforce, even as they keep electing lawmakers like the GOP House Leader who claimed that teachers were only working second jobs so they could buy boats and bigger houses. They tried and failed at merit pay for teachers. Oh, and they're one of those states that fake-dumped the Common Core.

So it should not have been a surprise in 2018 when the state's teachers put on their Red4Ed shirts and walked out in staggeringly large numbers. It had a large-but-not-large-enough-to-replace-the-governor impact. And it made some GOPpies like Kelly Townsend mad enough to try to slap a gag rule on teachers across the state (after trying to sue them).

But Gov. Ducey was pushed to at least admit out loud what was obvious from the facts and figures--Arizona's teacher pay sucks. In fact, back in 2018 he was promising a 20% raise spread over three years. That didn't happen. That half-assed attempt at a serious raise was still better than the latest proposal.

Ducey just announced that "it's time for a raise for Arizona teachers."

His budget proposal called for a teacher raise of 2% over 5 years.

Also, somewhere in there he threw in some threats about how the state would only pay schools for butts in seats--none of that distance learning stuff. His office tried to clarify that Ducey just meant that if students changed their enrollment to a different school (AZ is an open enrollment state), the money would follow the student, which is how things normally work there anyway, so why highlight it in the State of the State address. For educators, it sounded like a threat, and that seems like a correct read. Because everyone knows that distance teaching is like being on vacation. SMH.

But back to that raise. 0.4% raise per year? It seems kind of like a joke. Well, not a joke. A deliberate insult, like leaving a dime as your tip at the restaurant.

Ducey also took a speechifiying swipe at Prop 208, a measure passed last November that funds teacher raises by putting a tax on income over $250,000. Ducey has indicated that high taxes make rich people sad and he would like to lower them.

Posted by Peter Greene at Wednesday, January 13, 2021
Email ThisBlogThis!Share to TwitterShare to FacebookShare to Pinterest