Well, this was going to happen sooner or later

HI EXCUSE ME, I just found out the the prof for this online course I’m taking *died in 2019* and he’s technically still giving classes since he’s *literally my prof for this course* and I’m learning from lectures recorded before his passing

I used to tell my students that I would teach until I died, and then have my body stuffed and mounted with animatronics while old tapes of my teaching played. Turns out that I didn't do that, but it was still a thing someone could do.

If you think teaching is the act of pouring Knowledge Stuff from one container into another, I guess this makes sense. And I can imagine the administration salivating over the prospect of a "teacher" who requires no pay, no benefits, and no lengthy hiring process to acquire. 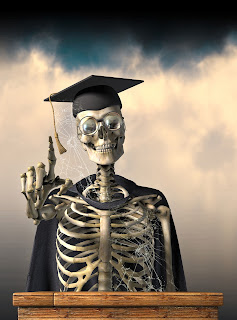 The weirdness that the poster talks about is, I think, a residue of the natural inclination we have to think of ourselves as in a relationship with our teachers. Hell, forty-some years later I still have a warm spot in my heart for Julius Sumner Miller and his videos of physics demonstrations which, though we were clearly watching a recording, seemed live and real and for us in 1974. So finding out that a person you think has been, in some way, sort of, really talking to you--well, they're actually dead. That's a little disconcerting, like taking a step backward and having your foot meet air rather than floor.

Practically speaking, why not. Is Khan Academy going to take down videos of "teachers" who die? Of course not.

But it's a reminder of what's wrong with this kind of "education," a kind of teaching that involves no relationship, like a performer stepping out on stage in front of nobody. No connection. No seeing who the students are, how they're reacting, what they feel, how well the lesson is landing.

There are reformsters who seem to believe, or at least want others to believe, that this kind of one-way lecture-only type of education is typical. It isn't, and hasn't been for decades. Because education runs on relationships. Except that that's expensive, so why not cram a few hundred students in a hall or have some mook deliver a canned lesson or just have them watch some videos, even videos recorded by someone who's now dead.

The weirdness of how this feels tells us a lot about education. After all, we watch movies and listen to music from dead people all the time. Some of us become obsessed involved fans, trying to dredge up every piece of information we can to feel closer or more connected to the dead performer. Others of us just watch or listen, relating only to the art and not the human behind it. Or we identify with the audience that was there for the work (hence the pervasive love of live audience recordings).

But in education we expect more than that. As students, we expect to be seen, and we build some sort of relationship with the teacher in front of us, a unique semi-professional one (yet personal enough that as students it can still rock the foundations of the universe when we discover a teacher wearing jeans or shopping for groceries).

As far as I know, nobody is trying to capture dead K-12 teachers yet, but much of the curriculum that teachers are required to write and align and record in painstaking detail in digital formats really is, literally, about reassuring staff-strapped administrators that if Mrs. McTeachalot dropped dead tonight, somebody could come in and do her job just like her tomorrow. And of course a great deal of robo-grading and robo-teaching is based on the notion that we can swap out live tissue for dead circuitry (and so far, it mostly sucks).

I've known teachers, now passed, who taught brilliant lessons, but I don't know how they could ever have been captured. The lessons, year to year, were tweaked in the planning to match the students of that year, and tweaked in the moment to match the immediate reaction. Captured in digital amber, they simply wouldn't be the same.

And so it becomes radical to assert that teaching is a job best left to the living. 21st Century education, indeed.