The 1776 Commission On Authentic Education

The 1776 Commission released their thing today, and pardon my French, Mom, but holy shit is it bad. You knew it was going to bad. It's really bad. You probably didn't know that Progressivism is on the same Challenges to American Principles list with slavery and fascism. Slavery, by the way, is addressed primarily through a massive whataboutism. 45 pages, and every one of them is filled with horrific, racist, dumb, awful awfulness (okay, pages 2 and 4 are blank). 43 pages of awful (without any footnotes or endnotes or citations or bibliography in sight for this work of ultimate scholarship). I don't have the time at the moment to pick apart all of it (I'll link to it, but you really shouldn't read it on a full stomach, and empty stomach, or at the end of a hard day). 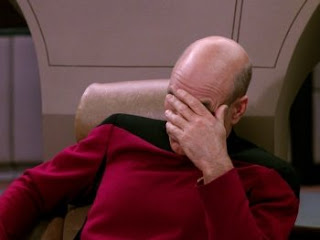 I will note that the report came out remarkably quickly--the members of the commission were announced on December 18, which gave them a month, and a month full of holidays like that. It's almost as if someone had already pretty much written the report ahead of time (or, it turns out, as if someone had simply cut and pasted big chunks of it).

At any rate, I'm going to focus on just one section, because it articulates so very clearly how terribly, dangerously wrong these folks are about education.

In Appendix IV: Teaching Americans About Their Country, after the section on the misuse of history, after the section about the decline of education (late 1800s, with the rise of progressivism), we arrive on page 37 at "What Is Authentic Education." This is the part I want to look at:

"There is no question that the one crucial purpose of education is to equip individuals with the knowledge and skills they need to provide for themselves and their families." Yes, never forget that education is about making yourself a more useful meat widget so that important people will be willing to give you some money in exchange for your meat widgetry.

But the section also acknowledges "the broader and deeper education called liberal education." And here comes a truly astonishing paragraph:

Education liberates human beings in the true sense—liberation from ignorance and confusion, from prejudice and delusion, and from untamed passions and fanciful hopes that degrade and destroy us as civilized persons. It helps us see the world clearly and honestly. In revealing human nature, it reveals what is right and good for human beings: authentic education is not "value-neutral" but includes moral education that explains the standards for right and wrong.
Holy shit. Liberation from ignorance and confusion, because there is just one Right and True way to see things in this world, and true freedom comes when you no longer have to waste a single moment even considering that some other point of view. People become "self-reliant and respionsible" because once you know the One True Answer, you fall right in step with the other True Believers.
But there's more.
Students should be taught that we are all "equal members of one national community," which would play a lot better had the report thingy not said elsewhere "The assertion that 'all men are created equal' must be properly understood. It does not mean that all human beings are equal in wisdom, courage, or any other virtues and talents that God and nature distribute unevenly among the human race." Just that nature doesn't naturally create castes.
Now hang on. The thing reasserts that all human's unique talents and characters should be respected and valued, and that the fact that "equality and liberty belong by nature to every human being" is the moral basis of "civic friendship, economic opportunity, citizenship and religious freedom."
This education respects the students' "thirst for the truth. It is unafraid both to focus on the contributions made by the exceptional few, or acknowledge those that are less powerful, less fortunate, weaker, or marginalized." By embracing equality, we can better embrace inequality? And then we can "patiently address the ways injustice can be corrected."
"Patiently" is important because we need that as an alternative to the Bad Way:
Rather than learning to hate one’s country or the world for its inevitable wrongs, the well-educated student learns to appreciate and cherish the oases of civilization: solid family structures and local communities; effective, representative, and limited government; the rule of law and the security of civil rights and private property; a love of the natural world and the arts; good character and religious faith.
Because embracing all of that let's us use the proper approach to educate citizens:
In the American context, an essential purpose of this honest approach is to encourage citizens to embrace and cultivate love of country.
Don't get upset. Don't get mad. Don't be distracted by those little blips that will happen, donchaknow, here and there. Just hold on to the true values, the One Right View, and burrow into these things that, hey, you might not actually get to experience yourself, but if you don't, that's probably because you're one of those people who has not yet been properly assimilated into the One True View and it's your own damn fault for being an unpatriotic little bitch.
It's like someone managed to take the 1950s version of squeaky clean white American life and mash it up with 1950s style Soviet Commie borg-style mind-melding. No critical thinking here. This is "education" that rejects pluralism, inquiry, actual thought and scholarship, while simultaneously nodding at and minimizing injustice, asserting that victims of such injustice should stay calm and love their country because it includes people who have the right values (and the right personal circumstances).
Happy Martin Luther King, Jr. Day, and may the Biden administration swiftly drop this damned thing into the deepest circular file in DC.
Posted by Peter Greene at Monday, January 18, 2021