Arne Duncan said a lot of silly things while he was secretary of education, but perhaps most infamous was his notion that was that Hurricane Katrina was "the best thing" to happen to education in New Orleans. 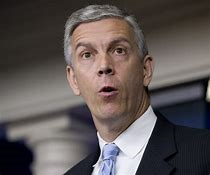 But now he's starting to make similar noises about the current pandemic pause. Here he is in an interview at the 74:

I don’t want us to go back to the old normal. And there’s a whole bunch of things that this time allows us to think and to challenge. Can we think about the fundamental school year and calendar year? Can we think seriously about not seat time, but about competency? Can we think about what should truly continue to be online and learn virtually, and what should be done in a physical building?

You will notice that the line about "the chance to learn anything they want, anytime, anywhere" sounds an awful lot like Betsy DeVos's repeated call for learning anywhere, any time. There were some fairly spicy replies to that, but actually the smartest response might have come from Benjamin Riley, head honcho of Deans for Impact:

Respectfully, no. Now is not the time to reimagine education, not when teachers and parents are crushed with unanticipated responsibilities. We need to provide support, full stop. I'm with you on closing the divide, but this moment will exacerbate inequities -- already is.

Duncan's idea to have the Big Reimagining Discussion right now makes a certain kind of sense if he imagines that such a conversation would take place in thinky tank and government board room, far away from actual teachers and students and parents, which has always been his way. Duncan shares several traits with DeVos, and one is a deep mistrust of teachers and public education, a sneaking suspicion that they are Up To Something and trying to hide their various failings. So it makes sense that as he smells Katrina 2.0, he would see this is a chance, while everyone in the actual professional education world is busy trying to make things work, to gather together the Movers and Shakers and Reimagine Education some more.

Duncan certainly isn't alone in his breathless hope that this is the moment that education-via-internet finally captures the hearts (and markets) of the US. There are other ed reform veterans who have a more clear-eyed view. Here's Robert Pondiscio's piece soberingly titled, "No, This Is Not The New Normal."

Kids will go back to brick-and-mortar schools—yes, even “government schools”—at the earliest possible moment. Most of them want to go. Their parents mostly want it even more strongly. The act of sending our kids every morning to a place called a school is a cultural habit formed over many generations. It persists because we value it, not for want of a better idea or a more efficient delivery mechanism for education.

I keep hoping that Duncan will retire to some quiet basketball court somewhere, or at least to some corner of the globe where people are uninclined to give him a platform, or at a bare minimum would make him share that platform with educational professionals. Of course, that last option would have to wait until the professionals aren't too busy trying to do the actual work that Duncan likes to pontificate about.


Posted by Peter Greene at Thursday, April 16, 2020
Email ThisBlogThis!Share to TwitterShare to FacebookShare to Pinterest