Good lord-- the advice/guidance/clever thoughts about how to re-open schools, particularly if any state decides to follow Trump's latest unfiltered brain fart, seem to have been generated, once again, by people who have not been inside a school since they became adults. In some cases, the advice appears to come from people who have never met tiny humans at all.

The CDC joins many folks advising that school desks should be six feet apart. This raises several issues.

First, many classrooms have zero desks. Primary grades often have few or minimal desks. High school labs or shops have benches, not desks. 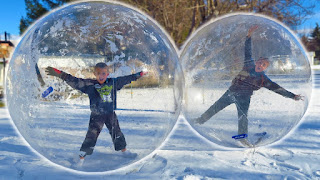 Second, let's do some math. Imagining that each properly buffered student is in the center of a 6' x 6' square. That's 36 square feet of space, meaning that a class of twenty students would need 720 square feet of classroom-- so 20 feet by 36 feet, just for students. Increase the space if you want furniture like a teacher's desk or bookshelves or cupboards. The 36 square feet is not a new idea; apparently 35 square feet has been a long-standing standard for child center designs, though this article argues that 54 square feet is a better figure for the littles. For the older students, guidelines seem to fall around 30 square feet--but that decreases as the number of "stations" increases.

There are apparently "classic works" about the size of school rooms, and without putting further research into school construction, I can say that classrooms mostly probably have enough room to kind of pull this six feet distancing thing off-- if all classes are fifteen students or fewer. So all schools have to do is expand their teaching staff enough to bring class sizes down to the fifteen-or-fewer level. And find enough classrooms for all those additional classes they have to create.

So that problem is solved, provided we can simply teleport students into their seats. The problem, of course, is that students move around.

Authorities are suggesting, "Well, just stagger the movement between classes." On the elementary level, that's sort of doable. Though a teacher who is taking her class of fifteen to the library now has to monitor a string of students 84 feet long, which may be a bit of a challenge. On the high school level, the challenge is much larger. Since students do not move from class to class in one solid group, staggering class dismissals means that some students will "pile up" in front of classrooms where the students have been dismissed yet. This in turn creates more travelling bottlenecks in the hall. Routing students between classes so that no collections occur in the hall will be a major challenge for administrators. Teachers are also going to have to look at arrival time as a seating chart factor-- if Pat is the last to class and has to walk through other students' bubbles to get seated, then that's a problem.

The CDC says, "Eat lunch in the classroom" and that seems fine-- someone will have to deliver the lunches (can't have the students go through the line without sacrificing lunch lady social distancing), and every classroom will have to have a fridge for brown baggers. Doable. Though if your contract includes a duty-free lunch period for teachers, that will have to be revisited.

Entrance into the building in the morning? That could be kind of slow, particularly for schools that already have security sweeps and metal detectors. But if 100 students are waiting in line to enter, and they are standing 6 feet apart-- well, that's going to create its own kind of obstacle in the neighborhood.

Busing? Run the busses at 1/6 capacity and make six runs in the morning and afternoon? In an area like mine, where a bus run is sometimes 30-45 minutes, that would be a challenge, but maybe that's where you give different grades different start and finish times during the day. Going to be a challenge for multi-child families.

No recess? Or recess in distance bubbles? Phys ed class? I don't want to think about what elementary school kids will be like without any physical activity. Other classes are going to suffer as well; what exactly will a band or orchestra look like with members sitting six feet apart? Chorus?

And how does it work when a teacher has to keep saying, "Yes, I can help you with that problem, but only from over here." Teachers will have to master a whole new level of diligence for even the simplest things, like several students needing to sharpen pencils at the same time, or handing out workbooks or papers.

All of this, as expensive and annoying and ridiculous as some of it may seem, is probably doable at most schools (some specific locations will even have advantages, like schools where the rooms open on the outside and not on a hall). But none of these challenges is the largest one.

How do you convince students to comply with all of this?

What elementary students will comply with not running over to hug their best friends? What kind of play or social development occurs when children are required to play by themselves? When someone is sad and crying (an event that, I am told, occurs roughly every 22 minutes in the primary grades), which teacher is going to say, "I'm not going to hug you, and nobody else in here is allowed to, either."

On the high school level, where students take a certain delight in bucking the system, what is going to happen when all you have to do to be a rebel is get close enough to someone to touch them? And just how far will some schools go to put their foot down and discipline their way to compliance ("I'm sorry, Mrs. Wiggleworth, but Pat is suspended for repeatedly standing four feet away from other students").

And what kind of dreadful school culture grows in an environment where you are never supposed to get close enough people to look them in the eye or touch them?

I could go on and on; I'll bet those of you who are teachers have already thought of a million issues. The main point is this-- when folks like the CDC say, "Well, just space classroom desks six feet apart and have them eat lunch in the classrooms," they don't seem to understand that they have addressed roughly 6% of the issues that will come up in coronavirus school. It's going to take a huge amount of thinking through, and it would be useful (once again) if the Big Cheeses In Charge actually consulted the people who will be the boots on the ground for any such venture.

P.S. I have skipped over the part where a team of forty-seven maintenance people wipes down the entire school with bleach every half hour. Extra staff, extra people to distance around, and oh, the fumes.

Posted by Peter Greene at Wednesday, April 29, 2020
Email ThisBlogThis!Share to TwitterShare to FacebookShare to Pinterest