Education Next's spring issue is featuring a little Common Core debate, asking if the Core worked. There are three responses in the actual debate, plus a sort of bonus response in a separate article. I'm sorry to report that many of the same delusions that brought us the Core disruption of education are still firmly in place. Let's take each of these one at a time. Warning-- every one of these guys is going to talk about scores on the Big Standardized Test as if that's a valid measurement of student growth and achievement. It's not, but it's what they're going to use.

Loveless notes that failed education standards "do not flop spectacularly," by which he means there's no good footage of something blowing up. But he's looked at the research, and he has the receipts. And he has one damning item that doesn't usually come up-- effective textbooks are being rejected to make room for texts that are more perfectly aligned with the Core standards. Here's his finish: 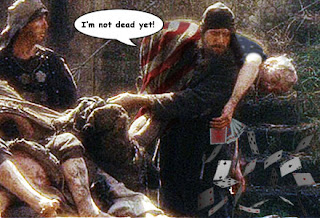 In short, the evidence suggests student achievement is, at best, about where it would have been if Common Core had never been adopted, if the billions of dollars spent on implementation had never been spent, if the countless hours of professional development inducing teachers to retool their lessons had never been imposed. When will time be up on the Common Core experiment? How many more years must pass, how much more should Americans spend, and how many more effective curricula must be pushed aside before leaders conclude that Common Core has failed?

Polikoff likewise looks at the research and finds the results unimpressive. However, Polikoff has suspects to blame.

For one, it's our old friend implementation, and the classic reformster complaint that people are having trouble with the Core because they aren't doing it right. For instance, studies find that teachers keep using their own professional judgment instead of the Core's, an entirely predictable place for teachers to be a decade later. Teachers will try anything they're directed to try once or twice; they won't keep using things that don't work. Polikoff blames the structures in the system.

But he finds the new reformster push for "quality curriculum" promising, likes the dream of teacher improvement "at scale," and credits the Core for preparing the path for a national curriculum market (which is as it was designed to do). Polikoff looks into the future and sees schools that are awful and in disarray, and he would like to "clean the policy clutter." He advocates for states requiring that schools choose from a short list of approved texts, making me wonder if a state like, say, Texas, where the state approves just one text, get superior results. He asks if the country really needs 10,000 school districts? He's not advocating a federal takeover, mind you, but the states really ought to look into the issue.

Local control is important? Students are different? Polikoof pooh-poohs both ideas, and he points to Success Academy and KIPP, where teachers are expected to comply with the school-approved program. But that's a lousy example-- Success Academy is quite brutal in blocking and pushing out students and families that don't comply with their model. They pick their one size, and instead of insisting that it fits all, they only teach the students that it does fit.

Ultimately Polikoff concludes that standards have done all they can do (which, you may recall, is hardly anything) and it's time to change the system to one that, as I understand his point, is even more standardized, compliance-centered, and one-size-fits-ally than the Core tried to make it. There are so many reasons this is a lousy idea, but one of the biggest problems with a soul-crushing compliance-centered, professional-silencing system is that it has to be run by people who know what the One True Answer Is, and who are always right. I'm betting zero dollars on that.

No surprises here. Petrilli agrees that "there's little evidence such progress has happened at scale" but he adds one word-- yet. Because if we just stay the course...

Petrilli offers what I'd call a slightly altered and therefor incorrect explanation of the Core, calling it "essentially lists of what students should know and be able to do" as they move through school, except I'd argue there is no "what they should know" in the Core-- just "skills" they are to demonstrate. The content hollowness of the Core has always been one of its major flaws. He also attaches the whole "college and career readiness" thing-- "The Common Core itself was explicit that young people who met its expectations would indeed be ready for what comes after high school." It did like to make that promise, but what was always missing was a shred of evidence that the standards "would indeed be ready." And one of the things that hasn't happened in the last decade is that colleges have not been sending up flares saying, "Wow! These incoming freshpersons are so very ready!!" As for the "career" part? That was always a late addition, recognizing that it was bad optics to leave those folks out-- but the Core has never pretended to be connected to career and work world stuff at all.

In Petrilli's alternate universe history, the Core "led to higher-quality and more rigorous asessments." But it didn't, and even reformsters have come to recognize that the Core-aligned Big Standardized Tests were junk. The reformster argument is that the combo of standards and testing forced schools to raise their standards. Nope-- it caused schools to focus a whole lot of time and effort on test prep, st first chasing the notion that meeting the standards would cause test scores to go up, and when that didn't happen, shifting to straight-on test practice and test prep.

Petrilli also sees the road forward as pushing top-down approved curriculum materials, with coaching for teachers, and then maybe we'll see the NAEP scores go up-- whatever that would mean.Kepp on the Common Core initiaitve, but add some curricular steering as well. Remember ten years ago when disruptors kept saying, "No! No! The Core is not dictating curriculum! You can still do that part-- these are just standards and guidelines to help you with that." Well, they take it back.

Bonus Round: Michael W. Kirst: In California, Common Core Has Not Failed


Tom Loveless made Kirst, a former California State Board of Education member, sad. He's in another parallel universe, and from there he wants to dispatch three rebuttals to the mean things Loveless wrote.

First, the NAEP is a lousy measure of student progress, but the SBA is awesome. He is half right. His description of the SBA is, well, optimistic.

California uses the Smarter Balanced computer adaptive assessment that includes extended responses where students must defend their answers and complete an hour-long performance exam that requires evaluating evidence and solving a problem.

Well, it uses some standardized test format stuff to pretend to do those things. It's true that some writing items are scored locally, but we're still talking a narrow test with limited range, highly coachable and unlikely to tell us anything about critical thinking or any subject matter that isn't math or ELA. Arguing that it's better than NAEP is like debating whether you'd rather be mugged with a knife or a club.

Second, Kirst wants you to know that some SBA scores went up. In third and fourth grade. Which is swell, but if those gains are lost in later grades, what exactly are we getting excited about?

Third, Kirst wants you to know that California didn't really have ten years because it took them a while to get up to speed, what with new standards and the great recession of 2008, etc. And he has surveys that say that teachers are getting in the Core swing of things. And more better aligned materials.

The problem in all four instances is the definition of "works," which is "gets better scores on that one Big Standardized Test we give every year." Does getting a higher score mean they'll do better at college or in a job? Nobody knows, but there's no evidence that it might. Do students who get a thorough Core soaking go on to lead healthier, happier, more productive lives? Does it make them smarter? Are they better citizens who would, for instance, not drink bleach just because a powerful adult tells them to?

Common Core failed for a variety of reasons. Top-down implementation--especially when the people who designed the damn thing don't even stick around to help with or oversee the implementation-- is doomed to failure. The Core was assembled and promoted by amateurs, and has no research base-- including any research on whether or not universal standards improve education. The Core has been rewritten "in the field" a gazillion times, to the point that nobody who talks about the Core is talking about the same thing as anyone else. The Core wanted to be a one size fits all answer to a question it couldn't even answer--

The Core was used as a way to avoid the big question instead of answering it. What are schools supposed to do? Instead of talking about that, Core promoters just skipped right over it to say, "Well, school is supposed to teach these standards so that they can be measured by these tests." The Core boxed out 80% of the school curriculum and did a lousy job with the math and English is tried to address, and it set the stage for a bunch of bad actors to try some other forms of disruption on the school system, like "score " public schools so they could be labeled failing, and milk students for data that would ostensibly measure their worth as future meat widgets.

The Common Core was a failure by every measure, and those places where folks are saying, "Look, we're doing it and it's great" are simply animating the Core's dead skin with their own locally produced ideas. At this point nobody is doing exactly what David Coleman and Bill Gates wanted them to, which is great. But it would be even greater if we could stop pretending that it was ever anything except a waste of money and time.

Posted by Peter Greene at Saturday, April 25, 2020
Email ThisBlogThis!Share to TwitterShare to FacebookShare to Pinterest