Sometimes expectations simply have to make way for reality. That seems to be generally true during holiday seasons anyway, but we have had a double helping of way-making this year. 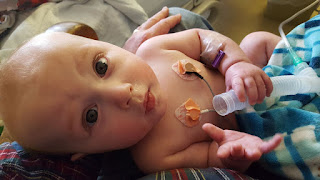 The short version is that Twin A started yesterday acting not much like himself, and things just devolved from there. By the time we were supposed to be sitting down with my in-laws, we were instead checking in to our local ER. From there, it was on to a room where we are waiting out some viral action (rsv) while undergoing respiratory therapy, iv fluids, and oxygen hosery. Twin B is just fine, so there is a bit of parental juggling going on, and a bunch of presents that aren't getting opened today. The low point was probably a bunch of adults holding down a poor, sad six month old child in order to shove a needle into his arm. (I know plenty of parents have been through plenty worse things, but I haven't.) Meanwhile, family is not getting seen, and every awful thing that ever happened to a child is roiling back up. This morning Healthy Twin and I drove through sideways snow along deserted roads to get back to the hospital and as I pulled into the lonely parking lot, James Taylor came on the radio singing "Have Yourself a Merry Little Christmas," a song I don't even like, but I had to sit in the car and finish bawling before I could head inside. Dammit, James Taylor.

I don't want to make this seem more tragic and fraught than it is. Both of my siblings have been through far worse. But it reminds me of a few things.

1) Christmas is just a day.

All holidays are largely arbitrary and created out of unicorn wishes and manticore farts. Christmas in particular (all discussions of the "reality" behind it aside) is such a cobbled mess of random choices and co-opted bits of other belief systems. The cynical conclusion here is that holidays are just imaginary baloney and should be mocked and/or treated as foolish jokes that humans play on themselves. But they also stand as a testament to the tremendous power we have to bring Important Stuff to life, to fill literal nothings with the most weighty somethings.

We should remember to use that power only for good.

2) Can we talk about insurance?

Once again, I wonder what people who don't have insurance can possibly do in these situations. Every Congressman who has failed to get CHIP reauthorized should be ashamed to open a single present today.

3) Children are a big deal.

Every person who thinks that children can be handled like meat widgets whose purpose is to generate actionable data should have to spend a month in a pediatrics ward. Children are small and fragile and helpless and staring directly into our responsibility to care for them should be scarier than floating over the Grand Canyon in a hang glider. "We'll just make them sit down and do academics for an extra hour" or "We'll just hold their advancement to the next grade hostage so the little bastards understand that we mean business" are awful, indefensible thoughts to even come close to.

Also, if you think Those Peoples' children are somehow fundamentally different and less than and not as worthy as, then something is terribly wrong with you.

If you ask me to rattle off the meaning of life in a sentence, I would say that we are put here to watch out for each other, to take care of the people we are in a position to take care of. Connection means everything. Work we do with other humans has to honor that connection to matter. The connection doesn't have to be warm and mushy, but the notion that we can sit behind a desk and manage or handle other human beings in any effective way without a personal human connection-- that's just faulty thinking.

The story that goes with this day (again, I'm not here to argue with you about historical truth)  has several powerful features for me. One is the idea that what you want or expect is not always what you get-- and sometimes what you get is way better. Another is that anyone telling you that he knows exactly what God ants or precisely what God intends-- that person is full of it.


It has taken all day to finish this post. I' m typing onehanded, in bed with my son. Tests, drugs, treatments. They say he'll probably get worse before he gets better, and if he gets too much worse we'll be sent to a larger regional hospital. It's dark outside now. My wife has gone home to be with our other son. My son and daughter have been checking in. This has been a long damned Christmas. Anyone who thinks they know the answers before they've met the problem is a dope. Hold on to the ones you love and try hard to love the rest, too, because we only have a few years together.

I may go quiet for a few days, or I may come here for distraction. I swear I'll get back to education. Merry Christmas and God bless us, every one


Posted by Peter Greene at Monday, December 25, 2017
Email ThisBlogThis!Share to TwitterShare to FacebookShare to Pinterest