Look at this cool piece of junk mail I got today! 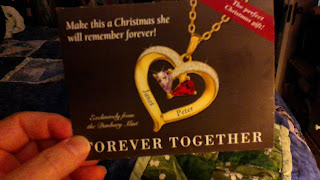 This came to my address, and offers a lovely necklace that does use the correct birthstones for Peter and Janet, but I probably won't order one, because Janet is my ex-wife.

Getting my previous wife's mail at my current address is not at all unusual. I used to get even alumni fundraising calls from her alma mater (I think we got that stopped after about the third time I left some poor work study undergrad tongue-tied).

I want you to appreciate what an achievement that is. My ex and I divorced over twenty years ago. Since then I have changed address twice, and she has changed address five times-- most recently to Hawaii. She has remarried twice; I have remarried once. Somehow some of her mail arrives at my current home with her current married name. And I know that at least one of her old addresses appears on my credit history report.

I'm not mad about any of this. My ex is a lovely person, a great mother to our children, and someone who deserved a better husband than I was back then. But for her mail to occasionally be sent here, especially as if she were still my wife, is an impressively epic piece of bad record-keeping. It is the kind of thing that an actual human could probably sort out, but the vast network of computers that store and share and track these kinds of data just keep perpetuating. And please note-- as m history suggests, this isn't just a matter of failing to clear out old records (like the mail that comes for my wife under her previous married name), but a cyber-creation of all new, all wrong records in the system.

So when we talk about Big Data and its desire to gobble up and store and use and sell every nit of data generated about our students, I'm appalled at the Big Brothery intrusiveness of it, the omnipresent creepiness of it, the horrifying way that such data records could be used to tack and tail and guide and shove students into a corporate pigeonhole pre-prepared for their adult lives. I'm alarmed at how students are steadily becoming "resources," little meat widgets whose use is to generate data points for the Data Overlords to gobble up, poop out, and sell off.

But I am also mindful of how wantonly sloppy and confidently inaccurate our Data Overlords can be. It's scary to imagine an Orwellian future in which a deathless data file determines a human being's entire life. But it's even scarier to imagine a Kafkaesque future in which that data file includes all sorts of shit the software simply made up. It's bad enough to imagine a high school grad who can't get a job because the computer record shows a streak of anti-authoritarian rebelliousness based on her behavior in fifth grade or because the scores from terrible tests indicate a lack of verbal skills. But it's even worse to imagine a future in which a high school grad can't get a job because of what the digital record says she did on a trip to Paraguay (a place she's never actually been) or the data from a standardized test that she never actually took. Will live humans monitor and check this stuff? Of course not-- the whole point is that it would take too many humans too long to sort and check this much data. And the software will not have the sense to question data that makes no sense.

We already know that we can't trust our Data Overlords to keep our data safe. But can we even trust them to get it right on the first place. "Trust us," they say. "We'll take all the best care of all the personal data." To which I say, dude, you can't even keep track of who I'm married to, a matter of public record that you've had two decades to sort out. Not only can we not trust their motives in storing and crunching all the personal data in the world, but they're not even very good at it.
Posted by Peter Greene at Thursday, November 02, 2017