Inside a Proficiency Based Classroom [updated]

Robbie Feinberg took a trip into a Maine classroom for NPR, trying to see what things look like in the state that has shifted to Proficiency-Based Education (aka Competency Based Education, aka some form of Personalized Learning aka in the 90s Outcome Based Education). You know that I have my doubts about this bold new not-so-new idea (see here, here, and here for starters). But the devilish proof is in the details of the pudding, so let's see what Feinberg found. 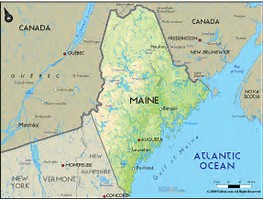 The piece opens with a "first thing you notice" anecdote. At Oak Hill, Feinberg first notices that there are sticky notes on desks, colored pink, green and blue depending on whether the students are on pace, a little ahead or a little behind. And the students have their seat for the day based on the color of their sticky note. And I'm already thinking, yes, that's cool, and we could spark it up by calling them the bluebirds and the green alligators and the cardinals, because this sure seems familiar to anyone who went to school a several decades ago. Did I mention that the school Feinberg is profiling is a high school, not an elementary school?

Once in their group, they get out a "personal learning plan," which is basically a checklist of the tasks they have to perform (aka the worksheets they have to finish) in order to complete this particular month's worth of stuff. And I'm going to go ahead and jump in here to say, with all due respect to the teachers who are doing this stuff, that this is not personalized learning, because personalized learning is about each student pursuing her own path to achieve her own goals. This is personalized pacing (a fact underlined by the fact that it's marked on a Pace Chart)-- each student is following exactly the same path, just at his or her own speed.

The teacher? The teacher occasionally presents mini-lectures and leads discussions, but mostly he floats around the room and "checks in" with each student as the students slogs her way through the batch of tasks. How does this particular teacher feel about it?

“The reason why I like it is because I get to talk to every single student,” he says. “One-on-one. Which never used to happen 10 years ago. There would be months going by, and I wouldn’t have a conversation with a student. So at least this way, I’m able to talk with every student a little bit at a time each day.”

Yeah, if it never happened ten years ago, and you went months without talking to students, that is totally on you, not the educational system.

In this particular district, the advent of this new system coincided with the merger of three districts, so the schools were already wrestling with a loss of local control. But like the comment about conversations, some of what they are saying about the new system is hard for me to see sense in.

The old system of grading A-F "would have to go," and in its place is a system of grades marks 1-4. Yes, that's quite a game changer there. The school hired consultants to help them deal with the new system, and the school watched a whole bunch of teachers, including, apparently, "really good, popular" ones, head out the door over the shift (the superintendent says he was glad to see them go).

Some of what is mentioned in the article is more that just befuddling-- it's appalling. The school sends out a list of "behind" students to parents, so not only do students get to suffer the public embarrassment of having to sit in the front of the room with the bluebirds, but their behind-ness is published to the world. I can't think of a single educational justification for that action-- not one at all. If you are reading this, Oak Hill administration, you should stop that right now. [Update: Feinberg reached out to me to clarify that the failure notices are sent individually to parents of students who are behind, for their own student. So not quite as horrifying. I will also clarify however, that my "stop it right now" also applies to seating by current progress.]

[Update: Since many have asked-- the article does refer some student reaction. Students note that the teachers roles is basically to tell the to stop talking and get back to work.]

It is possible that Feinberg belongs in the reporter bluebird group*, but the picture that emerges from his story is not of a school that's on the cutting edge of anything educational. Students have a pile of worksheets and other assigned tasks to work through, teachers don't so much teach as try to push them along through the stack, and students are ranked on whether they are ahead, behind, or on pace. Nothing in the article hints at true personalization, and nothing addresses the tricky issues (what happens when the year is over and the bluebirds are still behind by forty or fifty tasks-- what happens to them then, or the next fall?) And all of that is before we even get to the thorny pedagogical questions of whether or not these sort of tasks truly show that a student has mastered a skill or a chunk of knowledge. Can education really be reduced to a checklist of tasks (and that is what Oak Hill is described as having-- the teacher literally stops by the student to check off tasks on a list).

This could be a school from fifty or sixty years ago. There's certainly nothing admirable or inspiring here, certainly nothing cutting edge. I have always argued that PBL/CBE/Personalized Learning would end up delivering far less than it promised, but even I didn't imagine it would be this much less. As I said, it may be that Feinberg simply dropped the ball (and, I should note, this article is first in series). Maybe something magical is happening at Oak Hill that he didn't see. But if this piece is an accurate portrayal of what the PBL classrooms of Maine look like, the rest of us should run-- not walk-- in the opposite direction.

Oh, and this is the first article in a series. Stay tuned for more.

*Check the comments for more about Feinberg.