Vote with your feet. 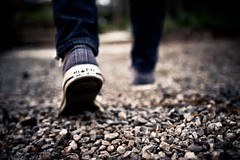 There's a huge problem with that. I'm not talking about all the reasons that it's just wrong-- I'm talking about why it won't work.

Let's say I'm operating a charter/choice school with 500 seats. Let's say that there are 500,000 students in the county in which I operate. I only need to capture a tiny sliver of the market to stay solvent. If a parent says, "You know, I'm not happy with this school, so I am going to vote with my feet," which of the following strikes us as a more likely response?

A) Charter CEO calls emergency meeting of board and administration. "All hands on deck!" He announces. "Parent #492 is unhappy and withdrawing their child. I need a task force to immediately find out why that parent was unhappy and the form another task force to redesign out instructional programs so that we can keep Parent #492 happy!"

B) Charter CEO says, "Whoop-dee-shit. Somebody go round up one of the other 499,500 students in the county to fill that seat."

In fact, cyber-charters in particular put huge effort into constantly recruiting fresh meat, while making virtually (har) no effort to alter their approach in response to all those foot voters.


A parental foot vote carries no weight. And since parents get their foot votes by trading away actual votes for board members, access to any transparency about school management or finances, and in some cases even simple access to people in charge, it's a lousy trade. The only thing they can do is that bipedal vote thing, and as we've seen, doesn't carry much weight.

"Vote with your feet" is just a nicer way for charter operators to say "Take it or leave it."

Meanwhile, in places like New Orleans, Florida and North Carolina, legislators continue to aid the invisible hand by cutting the competition off at the knees. The more parents are driven toward charter/choice schools, the less those parents matter, and the easier charter operators have it. So let's systematically gut public education. If people won't venture out of the public school building-- if they won't vote with their feet the way we need them to-- then let's coax 'em out of that building by setting fire to it. Then it doesn't matter where the stampede heads-- as long as we can catch a sliver of it, we're good.

Foot voting is never going to empower parents. In fact, since foot voting requires parents to give up all other forms of leverage, it's an approach that leaves them with nothing but tired shoe leather.
Posted by Peter Greene at Wednesday, July 26, 2017
Email ThisBlogThis!Share to TwitterShare to FacebookShare to Pinterest