If there was one thing that was going to be a hallmark of the Betsy DeVos Depatrment of Education, it was going to be their studious hands-off approach. Previous departments may have used all manner of extra-legislative legerdemain to impose their will on the states (Common Core arm-twisting, Race to the Top bribery, waiver-based extortion). ESSA was born out of bipartisan grumpiness over USED's long, grabby arms, and yet, one of John King's final actions as secretary was to get himself spanked by Lamar Alexander for STILL trying to write laws from the USED offices. 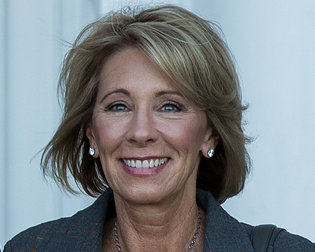 "I will never do that kind of baloney," Betsy DeVos said.

"Easy to say until you have the wheel of power gripped tight in your own hand," said I. Here's a woman who has spent her whole adult life trying to impose her will on the education system. Now that she actually has the power, can she forgo actually using it?

Well, meet the new boss, same as the old boss.

And I don't mean actually meet her, because DeVos rarely does press, and when she does, it's a big nothing sandwich.

As reported by Erica Green in the New York Times, DeVos's department has decided they will be the arbiter of adjectives, the setters of standards, the commandants of state capitals. Folks have submitted their ESSA plans, and USED is feeling its oats:

...the Education Department’s feedback to states about their plans to put the new law into effect, it applied strict interpretations of statutes, required extensive detail and even deemed some state education goals lackluster.

The department has actually decided to dictate what "ambitious" means in state education plans, a move which Mike Petrilli (Fordham Institution and the first number in every ed reporters rolodex) called "mind-boggling."

Granted, "ambitious" is a fairly useless legislative weasel-word that in this context means almost nothing. But folks were reading DeVos's early signals to mean that states would get the benefit of the doubt in any fuzzy areas. The head of the Delaware branch of the state-spanning reformster advocacy group CAN gave DeVos a pass (and he's allowed, because, somehow, he was one of the co-authors of Delaware's plan) because he admits they had shied away from being "bold and aggressive," thereby tripling the number of meaningless words in the conversation.

The Leadership Conference, a group of education reformsters dressed up as a civil rights type group (it includes Stand for Children, Democrats for Education Reform and Teach Plus, groups that have been tireless in pushing the corporate reform of public education), sent a letter arguing for retention of a mass of Obama-era criteria for evaluating state plans,demanding that the department serves as "not simply a rubber stamp of state submissions." Their preferred adjectives are "aggressive, meaningful and achievable."

This is the kind of imprecise blather you get when education policy is hammered out by amateurs. It often gives me flashbacks to working with student teachers in my classroom and some variation of this conversation:

Me: So your plan for tomorrow is to have an "ambitious" discussion about Huck Finn. What does that actually mean?

ST: What do you mean? It'll be ambitious.

ST: I don't know. Ambitious, you know? Like hard and stuff.

There are two big problems with the policy discussion this has touched off. ESSA was written by education amateurs, and now state-level amateurs will design the plans which will in turn be evaluated by the amateurs at the department. I'm betting not one of the people involved in this process would be able to walk into a class and effectively teach and ambitious lesson. So problem number one is that none of the people involved in working with this policy knows what he is talking about.

Not that specifying would help, because that would require a specific one-size-fits-all answer, which would be an answer that was wrong in the majority of the cases. That, in fact, was what we got with Common Core-- an attempt to lay out specifically what an "ambitious" education would look like, and it was junk.

The further away from the classroom education policy is set, the worse that policy will be. It will either be too specific, and tie the hands of teachers who are far better positioned to decide what will work with a specific set of students than folks who have never met those students. Or it will be too vague, which will be useless-- and then someone will try to firm it up by making it specific anyway.

Brace yourself, because I am about to agree with Neal McCluskey of the hyper-libertarian CATO Institute:

And so we remain pretty much where we were under the Obama administration in education, and where we are with every law that leaves it to regulatory agencies to fill in the meaning of crucial terms: with states, localities, and the people at the mercy of bureaucrats and secretaries.

So USED will be defining "ambitious" and "challenging" and all sorts of other words that they don't really know the meaning of in the context of a classroom, states will dance around trying to make the department happy (and, I predict, in some cases pleading for a template to follow, which takes us right back to Common Core), and by the time it all filters down to a classroom, we teachers will be trying to just get our job done without tripping over it too much. My apologies to my many progressive friends, but every day I move closer to the opinion that the best thing to do with the Department of Education is pack it in mothballs and stick in the attic, next to Grandma's old trunk.

So meet the new boss, same as the old boss, still insistent on defining adjectives and policy and rules, regulations and laws. She doesn't show Arne Duncan's predilection for talking nonsense to the public, but she's still going to tell us how to do our jobs.
Posted by Peter Greene at Monday, July 10, 2017
Email ThisBlogThis!Share to TwitterShare to FacebookShare to Pinterest