There are many arguments to be made for a school voucher program-- lord knows we've been hearing them for decades now. Some of them reveal a different concept of what public education is for, or a values system that gives more weight to entrepreneurial opportunity than actual education (it's more important to open markets than make sure that all children are getting an education). I disagree with these value choices, but I can at least recognize arguments that are built on those foundations. 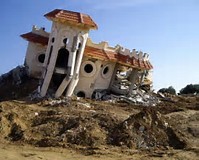 But some voucher advocate build their arguments on smoke and unicorn farts and yeti holograms. There's a good display of this style of voucher advocacy at the National Review site this morning, courtesy of Will Flanders. Flanders is Research Director at the Wisconsin Institute for Law & Liberty, a way-right Bradley-funded thinky tank; he has a PhD from Florida State.

Flanders wants us to know it's time to stop pussy-footing around with vouchers and just use "the language of their intellectual progenitor, Milton Friedman." Because vouchers are not a form of welfare (because if they were, that would be awful).

Flanders opens that by arguing for vouchers based on fairness, voucheristas have short-circuited their case for vouchers vouchers everywhere, and if they want to expand, they will have to take a new rhetorical tack. (Because the education debates are not about education, but about PR strategy). If vouchers are to level the playing field for poor families, then we'll never be able to expand vouchers for wealthy families.

Then Flanders tries to make his This Is Totally Not Welfare argument.


There is a critical difference between school choice and most welfare programs. Social-welfare programs are redistributive — taking from those of means and giving to those without. School-choice programs are different. In their purest form, they take money that is earmarked for a student in a public school and transfer it to an alternative private school that the student’s parents believe will provide a better education. The money is spent regardless of where a student’s parents decide to send him to school.

There are several levels of high-grade baloney here.

One is a standard choicer sleight-of-hand. We're taking the students' money, the family's money and giving it to the choice school. Except we're not, because that money is taxpayer money. This is a dishonest argument because conservatives already know the counterargument because they unleashed it against the Bernie Sanders Free College for Everyone Plan.

But Flanders can't admit that vouchers spend tax dollars because that would mean this IS welfare-- Wealthy McGotbucks pays his school taxes and the government gives a chunk of that money to a poor kid so that the poor kid can go to a private school. Voila-- redistribution of dollars.

So to avoid the problem of arguing for what they hate, voucheristas have to pretend that the money is"spent regardless," like a pile of money that just magically appears wrapped up in a bag marked "school." But as anybody from Wisconsin can tell you, schools are paid for with tax dollars, and just like all other tax dollars, the extraction of school tax dollars is open to argument, negotiation and general circumvention. No conservative anti-tax folks are looking at the pile of school tax dollars and saying, "Well, clearly that's a cost we have to just keep paying and there's nothing we could do about it by way of lobbying or legislation or electing a governor bent on crushing the public sector."

Then Flanders is back to arguing that Friedman's ideas are really good. And from notions such as the idea that parents will be rational actors who pick schools based on hard data, and not folks making highly emotional decisions about their children while floating in a market clogged with asymetric information where the only "hard data" they have is marketing fluff from private schools-- well, Milton was full of it on that one.

Nor is there any reason to accept, as Flanders does, the notion that having to "compete for students" will somehow create better schools, when the very notion of treating students like prizes to be collected rather than human beings to be served is a disastrous notion (for so many reasons, but consider this one-- in a system where students are prizes to be collected, some will be more valuable than others, and the ones who are least valuable will be the ones who most need the help of the school).

As advocates, we cannot and should not abandon the fairness-based argument for school choice. But if we are to realize Milton Friedman’s vision of an educational free market, we must couple our appeals to fairness with appeals to the economic liberty on which his vision was based. American parents of all classes and income levels deserve nothing less.
I give Flanders credit for one thing-- at no point does he try to argue that achieving Friedman's goal would provide a better education for every student in this country. But he also fails to state the obvious-- that a voucher system would be, in effect, a federally-funded free market, which is its own special kind of oxymoron. Not that we don't have such things.
To make sure that people don't go hungry, we collect a bunch of tax dollars and redistribute them, voucher-like, to some folks who then go buy food in a free market store. Flanders and his colleagues suggest that we collect tax dollars and redistribute them to some folks who then go buy school enrollment in a free market. Flanders seems to want to distinguish between these two by not means-testing recipients of school vouchers on the theory, I guess, that when you redistribute tax dollars to non-poor folks, it's not welfare. Which is one more reason that Flander's argument is not only wrong, but intellectually dishonest.