What About Flat Earthers?

This week the Denver Post ran an.... intriguing? unexpected? gob-smacking? piece about the Flat Earther community in the US, which is, for some reason, centered in Colorado. And these folks are committed. 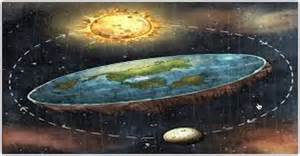 You might think that this is some sort of hipster irony thing, like the Church of the Flying Spaghetti Monster. But take a stroll through just one flat earther youtube channel-- Globebusters-- and you'll realize that nobody means to be funny here. The international space station? A huge fake.The edge of the world? A barrier of ice. Why don't we feel the alleged speed at which we're supposed spinning with the earth's surface? And is NASA, as another flat earth-- well, I'd call it a group but it appears to be just one guy-- asserts, a secret arm of the Freemasons? And why do conspiracy theorists always have such bad spelling skills?

The Post piece offers a hint at the appeal:

“They want you to think you’re insignificant, a speck on the earth, a cosmic mistake,” Sargent says. “The flat earth says you are special, we are special, there is a creator, this isn’t some accident.”...

He and other Flat Earthers can only speculate why the global conspiracy has had such staying power for more than 500 years, or why “the top” — the uber-elite heads of governments, universities and major corporations that allegedly know “the truth” — would continue to uphold a scheme that offers little in the way of riches or strategic power.

But I'm not here to discuss the merits of Flat Earth Theory which is, after all, well-destroyed bunk.

My question is-- what do we do with these folks?

Sure, it's a free country and you can believe whatever dumb thing you want to believe. You can ignore all the scientific evidence and sense that you like, provided that you don't start clubbing people over te head or burning down buildings in the name of your beliefs. But for the world of education policy, we're going to need a better answer than that.

What if they decide to set up their own Flat Earth Charter school? Should that be funded with public tax dollars, or even allowed/ Some charter supporters argue that whatever parents want to do should be allowed ("freedom!"), but does the society that funds education have a stake in making sure that education is not filled with falsehoods. Those Flat Earth Charter students would eventually be adults whose ability to contribute to society, function well in the workplace, and vote responsibly in elections may be compromised by the big slab of baloney rattling around in their heads. We can take the attitude that families that saddle their children with non-functional educations have made their own bed, but people who can't pull their own weight in society become a cost to it. We can say, "Let Pat try to be a Flat Earth Rocket Scientist-- if Pat can't support a family or make a living, that's Pat's problem" which is true right up until the point that Pat gets hit by a car and needs health care or collects a hundred other Pats and elects a Flat Earth city official.

I'm not going to argue that we need a system in which some government ministry decides which True Things are officially allowed to be taught. But one under-discussed issue with the charter/voucher of freeing parents to do whatever they want is that a certain percentage of parents believe Really Dumb Things and an increasing portion of our population is not so keen on things like "science" and "evidence."

So what accountability measures, what checks would we put in place so that a charter/voucher system didn't just become a patchwork mess of Teach Whatever The Hell You Feel Like? Because that can't be good for the health of the country or for the children whose education is sacrificed on the alter of the free market. The point of education, after all, is to elevate people to higher levels of understanding and skill, not to allow them to soak in the same old stew of ignorance.

My most cynical, least-charitable side says that some charter/voucher fans figure that bad people choose bad schools and get bad educations and end up poor and struggling as they should, and it doesn't matter because they'll be doing it on the other side of the big wall that separates the Betters in society from All Those Other People. But for those reformsters who truly believe that charters and choice are an important key to improving education in this country, my question remains-- what do we do about Flat Earth Charter School?