School in a Can: A Bridge Too Far

News of Liberia's plan to outsource its entire public education system has brought attention once again to Bridge Academies, an international privatization business that has perfected the art of school in a can.

Bridge is not new to this business; they've been at this mission of uber-standardization for a while. Jay Kimmelman graduated from Harvard in 1999, launched an edu-business (Edusoft), sold it, and decided to make his mark in education more globally, opening the first Bridge Academy in 2009. 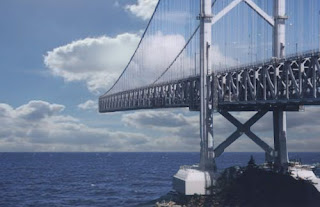 Kimmelman communicates his vision pretty clearly. On his LInkedIN page, the description of Bridge includes this: "Bridge disrupts the education status quo by ensuring that every child, regardless
of parental income, has access to the education he or she deserves." But that word "deserves" cuts several directions, and it raises the question-- who decides what these children deserve?

Whatever it is, they all deserve exactly the same thing. In the NPR piece, the reporter talks to Bridge's co-founder Shannon May (Kimmelman is her husband).

Bridge's work has drawn press attention before. Both NPR and Wired took a look at Bridge school-in-a-box operations in Kenya back in November of 2013 (NPR covered it as an All Things Considered Social Entrepreneurs Taking on World Problems segment, while Wired's story appeared in its Design section). The Economist did some wholehearted cheerleading for Bridge just last year.

The picture that emerges from these portraits is-- well. I keep worrying about that word "deserves."

On the one hand, Bridge is bringing education into some areas where resources are lower than low and the sheer infrastructure problem of creating and staffing so many schools would be daunting.

On the other hand, I feel certain that Kimmelman and his many wealthy backers (including Bill Gates, Mark Zuckerberg, Pearson and some venture capital groups) would never in a million years put their own children in such a school. The privatizing of Kenya and Liberia is the ultimate Other Peoples' Children educational reform. Not my kids and not on my continent. But those Other Kids in those Really Poor Other Countries-- a half-baked educational system will be fine for them.

How half-baked? The backbone of the school is the computer network. On one end of the network is the "teacher," who logs in and follows a the script to the letter. Because the teacher is following the e-script as delivered by networked tablet, central monitoring software knows exactly where the teacher is in the lesson. Sync up fifteen minutes late, says the Wired profile, and a call goes out to see what's going wrong in that particular school. Says May of her "teachers," "They are not content producers."

Bridge's teachers are trained in seven weeks, which is plausible considering that they don't need to be trained in their content knowledge-- just in how to deliver the scripted lessons. From the Wired article:

Bridge’s CEO, a former Silicon Valley entrepreneur named Jay Kimmelman, compares his company to Starbucks and McDonald’s — organizations that offer a consistent experience no matter where in the world you encounter them. Beyond its 212 branded academies in Kenya, Bridge has set its sights on Nigeria, Uganda, and India. The founders intend to be serving half a million children in 30 countries by 2015, and 10 million by 2025. “We’ve systematized every aspect of how you run a school,” Kimmelman says. “How you manage it. How you interact with parents. How you teach. How you check on school managers, and how you support them.”

As throughout the reformy world, results are advertised in test scores. Bridge has its own battery of in house tests which prove, unsurprisingly, that Bridge does great. They also contract with someone to do a reading and math test every year. Again, they do swell.

Of course, there are other measures of success as well.

The winning idea — basic education as a business — sounds counterintuitive, but it was central to planning for the couple and their cofounder, Phil Frei. For parents hovering around $2 in income per day, a potentially transformative education for their kids was just one of many things they couldn’t afford. The demand, however, remains enormous — the global market for low-cost private education is $51 billion annually. To meet the demand, May says, “we drive the price point low enough so parents can become consumers.”

So maybe the word isn't so much "deserve" as it is "afford." Sure, this isn't much like the kind of school most first-world well-to-do parents would want, but these are third-world poor folks, and if we can make a buck selling them a bargain basement stripped-down knock-off version of an education, why not? And I have to admit-- there's a legitimate argument to be made that as militaristic and below-basic as Bridge schools may seem, they are probably the best alternative available to some parents.

Of course, that raises the question of what could be done to create better alternatives. What hope do Liberians have if their government says, "Aw, screw it. Just let the corporate Americans have the business and then we don;t even have to try to create public education for our nation's children." And if the Chinese came to DC and said, "Look-- for a few million bucks, we will go ahead and handle all the schooling for your poor people," how would that play.

Not everyone in Liberia is keen on the idea of selling off their children's education, either.

International and local experts say such arrangement is not only a blatant violation of Liberia’s international obligations under the right to education, and have no justification under Liberia’s constitution, but will also deny indigents and poor access to quality education.

Many Liberian officials are pushing back. It remains to be seen if they can be successful in resisting this unprecedented move to privatize an entire nation's education system. We will have to pay close attention, because if Bridge is successful in this new endeavor, you can bet that Liberia will not be the last country to take bids on their education system.
Posted by Peter Greene at Monday, April 04, 2016