Another day, another group setting out to get education All Fixed Up. Today, let's meet Educators Rising.

Fine. What's this one up to?

What's their mission? And what are their standards for future teachers?

Educators Rising cultivates highly skilled educators by guiding young people on a path to becoming accomplished teachers, beginning in high school and extending through college and into the profession.

ER is "powered by" Phi Delta Kappa, and their mission is to pump up the ever-more-empty teacher pipeline, starting by recruiting and supporting high school students who might pursue a teaching career. It is not the only program of its kind (South Carolina's Center for Recruitment, Retention and Advancement had a teacher cadet program that was not too shabby), but the PDK nameplate gives it some clout and national reach, and that also means it's not just one more Gatesian style astroturf group.

They've come up with standards for high school students planning on entering teaching-- standards that are currently open for commenting. We'll get to those in a bit.

Who runs this group?

Co-director Dan Brown earned a degree in Film and Television and became a New York Teaching Fellow (the NYC district's in-house version of TFA), then wrote a memoir about his first year in the classroom. Moved from elementary to high school, got a Masters in teaching, and served a year as a USED Teaching Fellow in the Arne Duncan years. He has a TED talk. He's written and worked as a talking head. All of this in the last ten years or so. I give him a point for this line in his official government bio: "Dan Brown did not write The Da Vinci Code, and he is okay with that."

Co-director Ashley Kincaid has been in the education biz for even less time (seven whole years) after a career in management consultancy as well as communications boss for the Girl Scouts.

PDK CEO Josh Starr has been a superintendent with a stint in Stamford, followed by a somewhat contentious stint in Maryland. Read both the piece linked to and the comments with it-- Starr's legacy is complicated.

So not exactly mainstream education folks, but not the usual gang of reformsters, either.

What problem are they trying to solve?

Add this group to the list of people who have noticed that the teacher pipeline is drying up. They have also noticed that turnover is particularly bad in poor, urban schools where the need is great. Their breakdown of the problem hits all the familiar notes. Some are not entirely accurate (only 62% of teachers felt prepared when they started) and some are worth noting (10% of "special ed" teachers aren't licensed) and some signal a real problem (80+% of teacher pool is white, over 50% of students are not).

Amidst those data points, Brown adds an interesting note-- 60% of teachers teach within 20 miles of their old high school.

Which means that most of the future teachers in any given school are already sitting there in student desks. Which means that if we can find them and support them, we could make sure more of them make it through the pipeline and become successful teachers who stay in the profession for more than two or three years.

To that end, Educators Rising has a rough draft of some standards for high school students who are prospective future educators. Those standards are currently open to review through a simple surveymonkey form, though you'll need to set aside some moments to really look at them. I will warn you that when you get to the list where you declare your organizational affiliation, you will see some choices that are disheartening.

The actual standards can be found here, complete with notice that they are draft standards that are not to be cited or quoted, and I'm going to try to respect that, mostly. Here are some things I think you will notice about the standards.

First of all, there are eight of them. Here's the list.

Second of all, you may notice some things that do not appear among the standards. I didn't find any language to the effect that teachers must build their lessons by aligning to college and career ready standards. I did not find anything suggesting that teachers should learn to measure their own success based on student achievement aka test scores. And I didn't find anything suggesting that students interested in a teaching career should get a college degree in whatever and then hit five weeks of summer school to be classroom-ready.

Third of all-- jargon. There's lots of stuff like this (sorry--I'm going to quote):

They strive to build mutual respect and a positive rapport with colleagues and students. Accomplished teachers work productively and intentionally with other educators to promote vertical alignment, strengthen interdisciplinary connections, and create a culture of innovative practice.

The document makes teaching sound generally as inspiring and as exciting as accounting and as opaque as studying French deconstructionism. I read the document and wondered exactly what the audience was supposed to be, because if it's supposed to be the actual high school students we're trying to recruit, this thing needs a massive rewrite. 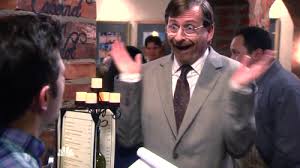 .Well, this guy is excited

There are points on which to quibble, like the idea of embracing many points of view, which sounds swell, except that content knowledge really ought to include the ability to recognize that some points of view are not actually legitimate (e.g. Holocaust denial or eating fried liver).

But this is actually the first time in a while that I've read a document from someone who wanted to fix any part of education and not felt like I needed a long shower afterwards (note to PDK-- feel free to use that line as promotional endorsement). Not saying I agree with every bit of it, but at least it's a serious opening to a serious discussion. I recommend that you actually go over, take a look, and leave some comments, because my biggest fear is that someone is going to stop by and explain to them that it's not reformy enough.