[Update: check the comments or this link for a bit more nuance and background from someone who lives there]

Brian Whiston was in front of state legislators last week to lay out his "vision" for education, and it's genius-- test the little buggers, all of them, into oblivion. 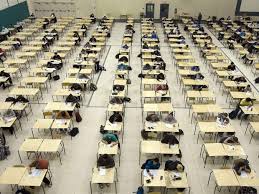 Where did Michigan find State Superintendent Whiston? Well, he was previously head of Dearborn Public Schools. He was a school board member for many years. And apparently he did some student teaching once. Oh, and he's won two awards-- he was Superintendent of the Year in 2014, and in 2007, he was Lobbyist of the Year. Because for part of his career he was a lobbyist for the Oakland school district (during which time he "learned some life lessons" about excessive expenses).

He did an interview with the Detroit Free Press back when he was elevated to the state level last summer, and in that he lays out some of his thoughts about education. These include ideas like model classrooms where the teacher is awesome and all other teachers can be trotted through and told, "See? Do it like this!" Let's imagine the teacher who replies, "Sure. Can I have this batch of students, too?" And he wants you to know that in Dearborn he was firing teachers all over the place, so totally working on that improvement of staff thing.

But his biggest plan of all is Top 10 in 10, Whiston's initiative to put Michigan among the top ten education states within ten years. That would be an impressive achievement, considering how far in the basement Michigan is on indicators like childhood literacy. That big strategic plan focuses on these goals:
That's an agreeably vague set of educational goals. But looking into the strategic details, we find a giant bureaucratic word salad laced with all the usual reformy suspects-- aligning with college and career ready goals, implementing with fidelity, deeper learning competencies, promoting teaching by "celebrating" educators, super-duper PD, providing choice for families, coordinate with employers to better produce worker drones for them, and also, most hilariously, "accelerate student achievement by adjusting the structure of the department," because if there's anything that has an influence on student achievement, it's how the state bureaucracy is organized. It is a reformsterific plan, and it deserves to have some abuse heaped upon its head, but I'll wait for another day.

Because there's one other thing that Whiston feels is super-important, and he stated that clearly to the Free Press in that big interview. Talking about what he'd do right out of the gate, Whiston mentioned calling a bunch of thinky tanks together to advise him (not, of course, teachers-- who the hell needs to talk to teachers about education), and also this:

Testing is obviously something I'm going to start day one trying to work towards.

Yes, obviously, Big Standardized Tests are necessary. Which brings us to his chat with legislators Wednesday.

Because what Michigan's students need rather than, say, an actual investment of resources in their schools or the removal of the charter school boot from their financial necks or a reality-based attempt to recruit and retain teachers-- what Michigan students need more than all that is more testing.

Mind you, the Michigan Student Test of Educational Progress  (M-STEP) is only on Year 2. Also, it's expensive, time-consuming, and roundly criticized for being one more crappy Big Standardized Test. A state House committee voted to cut its funding. But when a BS Test is failing, the only thing to do is test more harder.

Whisten proposes to administer the test twice a year (or maybe even more) to "get a better sense of academic progress, and inform class instruction" says the man who has never been a classroom teacher. And instead of starting in third grade, Whisten believes that "age-appropriate" testing should start in kindergarten.

So condolences to you, Michigan. A child-poisoning governor, an entrenched system of replacing democracy with emergency managers-- oh, excuse me-- with CEO's, and a state education superintendent with no classroom experience and a BS Test fetish.