You may recall that in the previous episode of Keystone Budgetary Follies, the Pennsylvania GOP-controlled legislature passed an not-too-delightful budget which Governor Tom Wolf neither signed nor vetoed, resulting in a budget adopted by default. Not very pretty, and lots of losers, but at least the long nightmare is over, right?

Governor Wolf did veto the fiscal code, which is basically the instructions for how to divvy up the giant pile of money dedicated to particular sectors. So there is an increase in spending on Pennsylvania education-- there just isn't any agreement on exactly who is going to be on the receiving end.

The GOP has staked out their rhetorical point, which is that by throwing out their spiffy formula, Wolf is creating winners and losers in the budget game.

This is both true and not true.

Pennsylvania's funding inequality is the worst. The. Worst. Google "Pennsylvania school funding worst" to see the many people who have said so. Or if you're a chart fan, there's this:

We have the mess that is Philadelphia. We have Chester Uplands, a district that has been bled so dry by charter schools that teachers worked without pay for a while. And we have almost a decade's history of cutting school funding. That funding slash is often laid at GOP Governor Tom Corbett's, but it's not that simple-- Corbett's predecessor Dem Ed Rendell used stimulus money to replace pubic ed tax dollars, creating a funding bomb that went off as soon as the stimulus money ended, and that bomb went off under Corbett's, whose response was to try Funny Accounting Tricks (let's count teacher pension payments as education funding) to cover up the fact that he was trying to fix a hole by shoveling deeper. On top of all that, the state government has a teacher pension balloon payment coming due, and our charter funding system only makes sense if you are a charter operator trying to get rich.

So, yes. We have issues.

Wolf's proposal is to attempt restorative funding. Here's how Newsworks reported it:

Wolf argues that districts disproportionately hurt by cuts that occurred under former Gov. Tom Corbett should be made whole before adopting the new formula.

"Right now, only 4 percent of districts across the state have seen their funding restored to 2010-11 levels, and we're over $370 million short of fully restoring the cuts," said Wolf spokesman Jeff Sheridan.

So we'd like to get everybody caught up before we start moving everybody forward. Except that everybody is behind, and some are more behinder than others, and we don't have enough money budgeted to catch everyone up.

The new budget gives the governor about $200 million to work with. A little over a third of that ($76.8 million) is going to Philadelphia. Pittsburgh, Wilkinsburg and Chester-Uplands also get a big boost. On the one hand, this makes sense because those are the big marquee Districts In Trouble in PA. On the other hand, there are a whole lot of other districts (including Wolf's hometown of York) that are also in a mess, and would have done better under the GOP plan.

So let the fighting over the pie begin. Or rather, continue.

School funding in PA runs across one of our touchiest nerves. The commonwealth is split between rural and urban, and that split is reflected in just about every aspect of Pennsylvania life, specifically in the way that rural and small town Pennsylvanians feel rolled over, used, and ignored by the big cities. On most days, it can seem as if every organization that has a state level presence, from athletic conferences to churches to the various state departments to the state teachers union-- everyone of them can seem heavily tilted toward the urban centers. Just take a look at our (heavily gerrymandred) Congressional districts 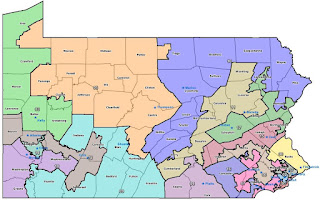 So yes-- rural Pennsylvanians are lumped in with people who are a three-hour drive away, while Philly gets a Congressman on every block. Yes. Population numbers. We know. We know. Like residents of rural western states we've heard it a hundred times-- because we don't live tightly packed together, we are entitled to less.

Rural Pennsylvania is highly attuned to the sound of someone saying, "Hey, we're going to need some of your money to go provide [fill in the blank] for Philadelphia or Pittsburgh or Harrisburg." And our sensitivity to that runs beyond financial issues. In my neighborhood, we are used to having companies market to us as if we're a suburb of Pittsburgh, even though it is 80ish miles and 90+ driving minutes away. It is further annoying that so many people act not as if we are in Pittsburgh, but as if we want to be, and should. Of course everyone wants to live in the big beautiful city. But no-- if we had wanted to pay the price in cost and trouble and expense of living in the Big City, we would have moved there.

You see where this is headed. "We want to raise your taxes so we can fix the schools in Philadelphia," is not going to be an easy sell anywhere in the state. Yes, under the new budget-ish spending kind-of-a-plan, every district gets some sort of increase. With any luck, it might be enough to offset the costs of riding out the 9-month budget impasse.

But by lowballing the costs of fixing education funding in PA, the legislature has guaranteed and ugly fight and a solution-- no matter whose it is-- that will be unfair to someone. Meanwhile, as always, because the state funds schools so inadequately, the slack will be picked up (or not) by the local taxpayers. The one thing Harrisburg has always done well is pushing the hard work of tax collecting and weathering the public discontent that goes with it out to the local school officials.

The legislature could have found some more money by addressing its charter problems. Specifically, they could have cut the cyber charter industry without a dime, which would be an appropriate response for a business that has failed at providing academic achievement or fiduciary responsibility. Instead, it's Christmas time in charter land.

And if this isn't all messy enough, remember that alllllllll of this mess is about the budget year that we are months away from completing. We still have to fix next year's budget, and since nobody anywhere in Harrisburg appears to have learned anything from last/this year's budget fiasco, I am not hopeful.

So how will the $200 million pie be cut, and who will be left with just a bit of crust? What sorts of maneuvers will be attempted at the state capital to spin all of this into more political gold (or at least gold-painted road apples). I don't claim to know the best path through all of this morass, which would not bother me quite so much (there are plenty of things I don't know) if I thought someone in Harrisburg was trying to find the answer. But I'm not sure anyone there even understands the question yet, which is, "How do you fix one of the most broken school funding systems in the USA?"