This would be an easy story to miss, a niche piece of coverage of interest to people who have been wondering what really happened to Kansas City schools almost five years ago.

There's a lot to sort out in Joe Robertson's story for the Kansas City Star. School board politics, a reformy superintendent, an unexpected departure. John Covington had begun overhauling the district, and then, without warning, he was out. His allies and opponents were both caught flatfooted. Accusations were made, relationships were broken, and the district was left, as Robertson puts it, "on the brink." Covington moved on immediately to Michigan to head up the EAA, the Michigan version of an achievement district, a state run (or at least state-handed-to-charter-operator) collection of "failed" schools (which is now itself doomed).

But I don't want to get into the details of Kansas City, messy as they were, because we now know why Covington left. Covington was "trained" by the Broad Academy, billionaire Eli Broad's personal pretend superintendent training program, and if you wondered how that network of graduate operates, here's the critical moment from Robertson's story. 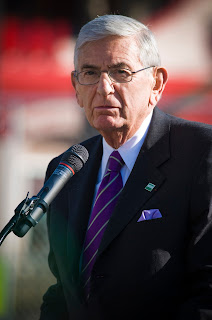 The call came from Spain, Covington said. “He (Broad) said, ‘John, I need you to go to Detroit.’ ”

That, Covington says, is the reason he left.

Eli Broad made a phone call, and that was it. Eli Broad can pick up the phone, give the word, and one of his people packs up, breaks professional and personal relationships without a word of explanation, and leaves town.

This is the reformster approach at its most naked and ugly. Our Betters, the men with money and power, want to be free to operate our education system like their own personal fiefdom, managed by people who answer to one authority and one authority only. This is a school system run by a shadow government, and a shadow government that is run by a godfather, an emperor, an autocrat. This is the opposite of democracy, the opposite of transparency, the opposite of a system that worries for one nano-second about the concerns of the little people, the Lessers.

This is the guy who wants to take over LA schools. This is the guy who is funding dozens of charter policy initiatives. And this is how he operates. Pick up a phone. Make a call, and his will is done.
Posted by Peter Greene at Saturday, April 02, 2016