Margaret Spellings, the queen of NCLB, the career politician that followed Bush II from Texas to DC, the Secretary of Ed who pushed policies that she had watched fail in her home state, has added one more loathsome act to her resume.

You may recall that Spellings was installed at the once-admirable University of North Carolina in a piece of purely partisan politics. As part of the ongoing work to stamp out every progressive, liberal or humane molecule in NC, Governor Pat McCrory and the GOP legislature have been stomping on public education in an unrelenting series of attacks.

But they really needed to bring UNC to heel, so to that end, they canned the previous well-respected president and installed, by means that failed any test for transparency, Margaret Spellings. 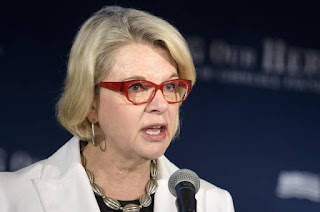 The list of reasons to be unexcited about her crowning was long. There was the whole NCLB thing-- a massive policy failure that she has continued to defend past the point of any sense or reason. She has had ties to the predatory for-profit college industry. She has hung out with the Boston Consulting Group, and she has generally supported the notion that education is a like any widget or consumer good, except that the education system needs to have its inefficiencies wrung out so that people will do more with less. As I've written before, Spellings either doesn't know baloney when she sees it, or she is determined to make a living selling it.

Oh, and there was that time, as Secretary of Education, that she called up PBS and told them to get that lesbian couple off the air.

As president of a major university, she could have done any number of things. She could have taken a bold and brave stand and said something along the lines of, "You can pass a stupid law like this, but you can't make me enforce it on my campus." She could have taken a somewhat less brave, more bottom-line practical stance and said something like, "We are a national university and I won't have the legislature's backwards law reduce our stature and interfere with our ability to recruit the best and the brightest of students from all across the country, regardless of their gender orientation."

She could even have taken a not too brave stance by saying, "Well, let's wait until the court challenges are done" or just pretending not to notice the law and just going about her business.

Spellings did none of those things. Instead, she sent this directive to the university chancellors, laying out how she expected them to comply with the ridiculously titled Pubic Facilities Privacy & Security Act.

a. Designate and label multiple-occupancy bathrooms and changing facilities for single-sex use with signage

b. Provide notice of the Act to campus constituencies as appropriate.

c. Consider assembling and making information available about the locations of designated single-occupancy bathrooms and changing facilities on campus.

The memo notes that there is a lawsuit currently pending against the governor, the attorney-general, and the university. Plaintiffs include a student, a faculty member, and a staff member from a UNC institution. The university expects to work with the AG office to get counsel and fight the lawsuit. In the meantime, they will uphold the law.

The memo also provides direction if anyone in the system is contacted "by a federal regulatory agency concerning the Act and its implementation," (something that could occur because, I don't know, the Act is pretty damn illegal). At any rate "if your institution is contacted by a federal agency with a question about the Act, please notify the Division of Legal Affairs at UNC General Administration." So if the feds come sniffing around, don't you dare talk to them-- refer them to the UNC Office of Official Stonewalling.

Is it a surprise or disappointment that Spelling shows little moral fiber or leaderly backbone? I suppose not. But it certainly is one more instance in which she is firmly on the wrong side of history, decency and basic American values. She has found one more way to bring shame to a once-proud UNC.