8 Reasons To Opt Out

My children are grown now. If I had school age children, they would not be taking the Big Standardized Test. Here's why. 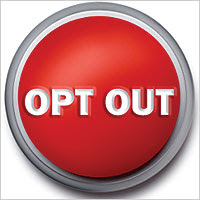 If your senator calls you into the office and says he wants you to have your doctor cut off both your legs, you are entitled to demand convincing proof that the amputation will be good for you.  "There's a big problem with widget production in America" is not proof unless it is accompanied by evidence that your loss of legs will fix the widget problem. You certainly have no obligation to answer questions like, "What limbs do you want to get cut off instead" or "Don't you care about widgets."

The burden of proof is not on you. It is on the people who say your child "must" take the test, and after years of this testing, they still have not met that burden.

No actual benefits to teachers.

Your child's test results will not help me. I am not allowed to know what questions were asked, which questions she missed, or how she answered them. Depending on the state, I may not see anything except one word and one number. It doesn't really get much better than that. Depending on the state, I will probably not see these "results" until next fall-- for students whom I have only just met, and so have no context in which to put the limited information.

No actual benefit to students.

What will your student get out of taking the test? Nothing. Well, perhaps fear and anxiety. But in terms of analyzing her strengths and weaknesses, there is not enough data returned from the test to mean a single thing, particularly since that data was collected by a single standardized test. Even multiple standardized tests will not tell as much as daily contact with a live, trained human being who sees the student as a real, live, multifaceted human being.

This is not life.

I know it takes up a lot of time and care and worry, but the BS Test measures just a narrow sliver of the entire child. It's like creating an entire profile and evaluation of your entire child based on your child's toenail clippings.

Were you bothered by how much of your child's year has been devoted to testing preparation and the test itself? Your local school administration may be committed to the BS Test, or they may just be running scared. You can certainly try to talk to them and to the politicians and bureaucrats in your state, but the most powerful message you can send is for the opt out numbers to get bigger and bigger. The parents of New York made themselves heard last year, resulting in state government pretending to address their concerns. True, the state did not actually address those concerns, but the attempt at PR gloss represented at least an acknowledgement that parents need to see change. Now, when this year's opt out numbers go up, the state will have to realize that this is an issue they can't PR their way out of.

I'm not even talking about the horror stories of vomiting or children with disabilities forced to take the test.

What does it do to raise a generation to think that "educated person" means "someone who scores well on Big Standardized Tests." What does it do to a generation to be raised thinking that the central purpose of school is the BS Testing. Even children who can take the tests calmly and do reasonably well need to know that there are things far more important to their education, to their lives, than the BS Test.

Here is a practice that has produced no benefits, helped no students, and improved no schools. At the same time, it has sucked up mountains of tax dollars, taken time away from actual education, and damaged schools across the country by narrowing their focus to only what is On The Test.

To insist that Big Standardized Testing is somehow a critical part of education is nonsense. It is way past time to say so, and nothing says so like refusing the test.