Did DeVos Get A Raw Deal

In today's National Review, Rick Hess is suggesting that Betsy DeVos got a raw deal, that attacks on her "have taken a torch to the basic standards of public discourse and democratic civility."

Hess acknowledges some of the issues surrounding her as legit ones:

During her tempestuous tenure in office, DeVos evoked strong feelings among her critics. Many disagreed vehemently with her views on school choice, religious freedom, and government regulation. They profusely criticized her talk of “factory-model government schools” and often deemed her ill-prepared for the role. Many thought she should never have agreed to serve under Trump, or else should have resigned in response to his earlier provocations. These complaints are legitimate and fair grounds for tough-minded debate.
But Hess finds attacks on DeVos go above and beyond that, and often "curiously unmoored from what she has actually done in office." Here he has a bit of a point. DeVos somehow entered popular culture pictured as a fool and a dope; I've argued before that while it may be fun to imagine DeVos as the dimmest kid in class (you may have seen the "Dere Mr. Presidne I resine" meme floating about), I don't think it's a particular fair or accurate caricature of her. 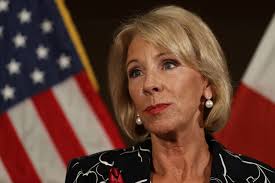