Bill Gates's aspirational announcements are always a good time. He swings for the fences. He announces the ends of things. He repeatedly almost takes responsibility for the floppage of large ideas.
But his new "My wish for 2023" note is unique in that, when it comes to education, his stated goal is really not huge.
There are nine goals. One is for education.
It is to raise math scores. 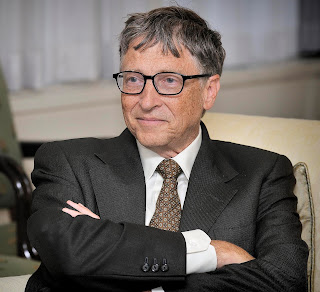 The foundation is doubling the percentage of their funding that's spent on math (from 40% to 80%). How is that going to be spent?
Our funding will help develop better instructional materials that keep students interested and motivated, give teachers the support they need to deliver these materials, and make sure that each math course gets students prepared for the next one.
By "materials," Gates apparently means "software."

In class and at home, students should be able to use software that’s interactive and personalized. It should know when they’re stuck and notify the teacher that they need extra help. Teachers should be able to choose from various ways of organizing students to help each other, for example helping them identify the students who are ahead and can help out the ones who are behind. The idea is to make the most of the teacher’s time and skills. We have many capable partners; the nonprofits Khan Academy and Zearn and the startup company Mastory, for example, are doing promising work.
That's awfully close to the description of a microschool, where some students hang out on a computer and some adult is handy just in case.
It is education via screen, a model that has not exactly gotten rave reviews during the distance learning days of the pandemic.
As always with Gates, there are some notes suggesting that he either doesn't understand basic things about education or he's pretending not to.
Although there are many factors that affect a student’s trajectory, the evidence shows that it’s extremely important for them to succeed in math. For example, those who pass Algebra I by ninth grade are twice as likely to graduate from high school and more likely to go on to college, get a bachelor’s degree, and go on to a high-paying career. And those who don’t complete Algebra I have just a one-in-five chance of graduating from high school.
Say it with me folks-- correlation does not mean causation. If sixth graders who have a large shoe size are more likely to become basketball players, it does not follow that making every sixth grader wear big shoes will result in more hoopsters. People who come from wealthy, well-educated families are more likely to graduate high school, more likely to get a bachelor's degree, and are more likely to take early Algebra I.
And as always with these letters, Gates wants us to know that he has Learned Things.
As I’ve learned through the foundation’s work in this field, it’s one thing to make modest improvements in a few classrooms, and another thing to spark big improvements at scale. If we’re lucky, we’ll hit some of our milestones within three years and be able to prove out these new tools within five. That will set the stage for school districts and states to make sure that all students have well-supported teachers and an engaging curriculum that makes math feel relevant to their lives.
"Another thing to spark big improvement at scale." Yes, indeed, especially if by "another thing" you mean "thing we have never successfully done." And that timeline-- hit "some" milestones, "prove out" the tools, "set the stage" for schools and states--that sounds a lot like we'll will probably be mostly ready to start beginning to prepare to launch the early preliminary versions of that thing.
I do like one thing about this new aspiration of Gates's--compared to his previous attempts to appoint himself the Czar of Us Education, this is fairly modest. With any luck that means the damage will be minimal.
Posted by Peter Greene at Saturday, December 31, 2022
Email ThisBlogThis!Share to TwitterShare to FacebookShare to Pinterest